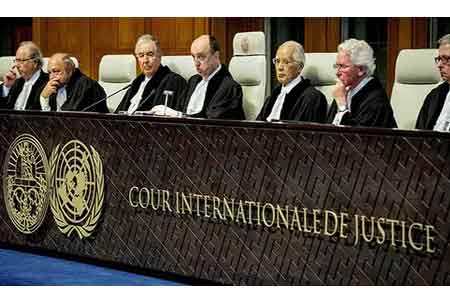 ArmInfo.Today, on October 14, the UN International Court of Justice in The Hague, began hearings within the framework of the claim for violation of the International  Convention on the Elimination of All Forms of Racial Discrimination,  filed by Armenia against Azerbaijan.  October 19 - with a similar  demand of Azerbaijan, concerning Armenia.

Earlier it was reported that the Republic of Armenia filed a lawsuit  with the UN International Court of Justice, accusing Azerbaijan of  violating the International Convention on the Elimination of All  Forms of Racial Discrimination (CERD). According to a report by an  international court, in a statement, the Armenian side claims that  for decades Azerbaijan has subjected the Armenian people to racial  discrimination, and that as a result of the state-sponsored hate  policy towards Armenians, the latter have been subjected to mass  killings, torture and other crimes. In addition, the statement says  that these violations came to the fore again in the course of the  conflict initiated by the Azerbaijani side in September 2020, which  once again grossly violated the Convention (CERD). The purpose of the  lawsuit is to protect the rights of Armenia and Armenians from  further infringements, as well as to prevent the aggravation of  disagreements. As a result, Armenia demanded that the UN  International Court of Justice introduce temporary measures against  Azerbaijan, marking this as a matter of extreme urgency.  Reacting to  this information, the Azerbaijani Foreign Ministry, represented by  the head of the press service department Leyla Abdullayeva, told  reporters that "in addition to the lawsuit filed by Azerbaijan  against Armenia in the European Court of Human Rights in January this  year, Azerbaijan will go to court in the coming days to hold Armenia  accountable for the systematic violation of the International  Convention on the Elimination of All Forms of Racial Discrimination  (ICERD) ". She noted that "after the cessation of the illegal  occupation of the Azerbaijani territories by Armenia, the facts of  gross violations of human rights against Azerbaijanis were carefully  collected and documented." "This includes cases of forced expulsion,  ill-treatment, torture, and murder of Azerbaijanis because of their  ethnicity," she said, adding that "after the signing of the  trilateral statement, Armenia continued to violate ICERD, preventing  the return of Azerbaijani displaced persons by mining the former  occupied territories and refusing to provide Azerbaijan with maps of  mined areas. "

Today, Armenia's Permanent Representative to the European Court of  Human Rights Yeghishe Kirakosyan, presenting Armenia's claim against  Azerbaijan, accused Baku of carrying out ethnic cleansing and  inciting ethnic hatred. "With this lawsuit, Armenia seeks to prevent  and receive compensation for the regular violence and manifestation  of hatred against Armenians. With a petition for taking urgent  measures, Armenia is trying to protect the rights of ethnic Armenians  from irreparable damage," he said, adding that the lawsuit and the  petition for urgent measures are based on International Convention on  the Elimination of All Forms of Racial Discrimination, which  Azerbaijan continues to violate.  He stressed that to this day, Baku  continues to consider the prisoners as criminals, claiming that they  ended up on the territory of Azerbaijan as saboteurs, after the  conclusion of a ceasefire agreement. He pointed to the so-called "war  trophy park" in Baku, as the embodiment of the ideology of hatred  towards Armenians, and the fact that, despite assurances of readiness  for peace, Azerbaijan continues to apply cruelty to prisoners of war  and civilians, as well as to implement a policy of extermination or  falsification of historical and cultural monuments located on the  territory controlled by Baku.