Prosecutor General: Tehran will never allow terrorists or warmongers to be deployed along the country`s borders 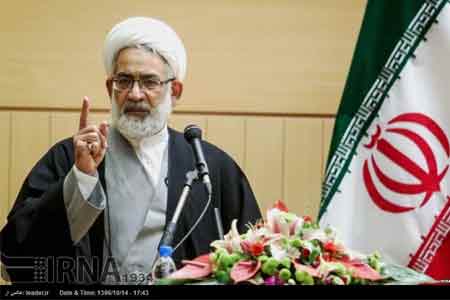 ArmInfo. Prime Minister of Armenia Nikol Pashinyan received the Prosecutor General of the Islamic Republic of Iran Mohammad Jafar Montazeri, who is on a  working visit to Armenia.

As the press service of the RA PM reports, welcoming Mr. Montazeri in  the Republic of Armenia, the PM noted that the Government of Armenia  greatly highlights relations and partnership with Iran, including in  the sphere of law enforcement. "I am glad to note that quite  effective cooperation has been established between the Prosecutor  General's Offices of our countries. Of course, Armenia is ready to  develop and deepen cooperation in the field of justice as well, and  your visit is a good opportunity for that. During the meetings with  the President of the Islamic Republic of Iran, we agreed that all our  state bodies should establish close cooperation with each other'',  Prime Minister Pashinyans aid.

In his turn, Mohammad Jafar Montazeri noted that his visit to  friendly and neighboring Armenia is a repay visit of the Armenian  Prosecutor General's visit to Iran. "Of course, due to the  coronavirus, this visit was postponed a bit, it took place later.  Before my visit to Armenia, 2-3 days ago, I met with the President of  the IRI Mr. Raisi. He asked me to convey his warm greetings to you,  praised you and emphasized that the meeting you had was very positive  and productive".

The Prosecutor General of the Islamic Republic of Iran added that his  country attaches special importance to the development and expansion  of cooperation with Armenia in all spheres. He stressed that the  centuries-old, good- neighborly and friendly relations between the  two countries are a good basis for jointly confronting the regional  challenges, finding the necessary solutions also by the realization  of the great potential. "We are interested in developing relations  with Armenia for the benefit of our countries," Mohammad Jafar  Montazeri said.

Mr. Montazeri stressed that Iran is guided by the policy of good  neighborliness in its relations with its neighbors, but at the same  time they will never allow terrorists or warmongers to be deployed  along the country's borders.  Prime Minister Pashinyan added that he  has great impressions from the meetings with President Raisi, noting  that the latter's emphasis on the fact that the new Governments of  Armenia and Iran started working simultaneously is perceived as a  message to open a new page in the relations between the two  countries.

In terms of meeting the challenges, the Prime Minister of Armenia  attached importance to giving a new impetus to the economic  cooperation between Armenia and Iran, in particular, the extension of  the gas for electricity barter deal, the completion of the  construction of the 3rd high-voltage transmission line, the  implementation of Meghri HPP project, the full use of the  opportunities of Meghri Free Economic Zone.

The interlocutors also referred to the processes taking place in the  region.

At the end of the meeting, Nikol Pashinyan asked to convey his warm  greetings to the Supreme Leader of the Islamic Revolution Sayyid Ali  Khamenei and President Ebrahim Raisi.