Aliyev on the activities of the Russian peacekeepers, the OSCE Minsk  Group co-chairs and the armament of Armenia 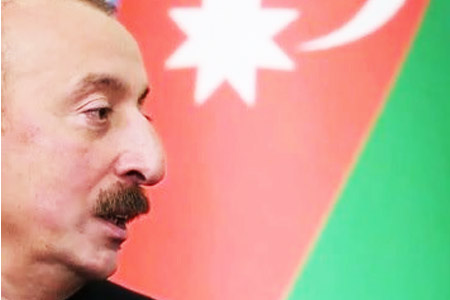 ArmInfo.On the whole, Azerbaijani President Ilham Aliyev positively assessed the activities of the Russian peacekeeping forces in Nagorno-Karabakh.  Thus, in an  interview with Anadolu, he noted that, of course, there are issues  that Azerbaijan does not like, for which they have claims.

"First of all, this is due to illegal visits of foreign citizens to  our lands. We have repeatedly raised this issue. Because Karabakh  (Artsakh) is our territory. No foreign citizens or vehicles can enter  these areas without our permission. A permission should be received  from us. However, I can tell you for sure that this issue has not  been resolved one hundred percent. At the same time, I must also note  that illegal entry of foreign citizens into Karabakh is recorded  extremely rarely. I also want to note that as a result of our policy  and the persistence of this comes to an end. But, of course, we would  like full respect for our sovereignty and territorial integrity.  Official representatives of Russia, high-ranking officials declare  that Karabakh is the territory of Azerbaijan. In this case, the  servicemen serving there should also carry out their activities in  accordance with these statements, "Aliyev said, forgetting that the  Nagorno Karabakh seceded from Azerbaijan in accordance with the  normative acts of the USSR, just as Azerbaijan left the Soviet Union  at one time, and in the referendum, practically the entire population  of Artsakh voted for secession from the Azerbaijan Republic and  proclamation of independence.

At the same time, the Azerbaijani leader touched upon the topic  related to the activities of the OSCE Minsk Group co-chairs, who have  an international mandate to resolve the Nagorno-Karabakh conflict,  and assured that Azerbaijan did not receive any proposals from the  Minsk Group after the Second Karabakh war. "And since there are no  initiatives, it is inappropriate to talk about the activities of the  Minsk Group. A year has passed. What do you propose? You say that the  problem needs to be solved. I declare on behalf of Azerbaijan that  the conflict has been resolved. So, proposals should be received.  What should they do? I expressed my opinion. The rest is in their  responsibility, "he said.

Aliyev once again touched upon the intentions of Armenia to acquire  weapons from Russia and assured that the Russian side had denied the  information about the purchases, although it was first heard from the  lips of Russian Defense Minister Sergei Shoigu. He once again  expressed dissatisfaction with the fact that Yerevan intends to  acquire new weapons, noting that this is not acceptable for  Azerbaijan. Aliyev apparently forgot that as recently as last week he  announced Azerbaijan's order from Russia for a new batch of weapons,  and this is not counting the already signed large arms contacts with  Israel and Turkey.  Thus, speaking about the "peacefulness" of  Azerbaijan, Aliyev decided that Baku should decide who should acquire  weapons and who should not, while actively arming its army and  maintaining a high level of defense costs - $ 2.7 billion allocated  to 2022 budget -