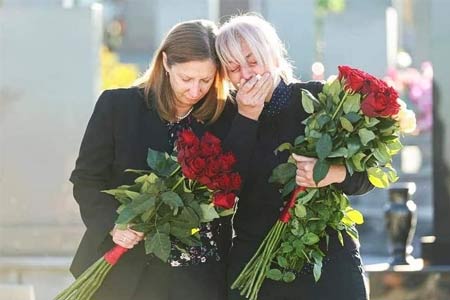 ArmInfo.US Ambassador to Armenia Lynne Tracy visited the Yerablur military pantheon. This was reported by the press service of the US Embassy in Armenia.   ''Ambassador Tracy paid her respects to those who lost their lives in  last year's conflict.  We extend our deepest condolences to the  families of those killed and injured last year and in the many years  of the Nagorno-Karabakh conflict'', the statement of the US Embassy  reads.

To note, exactly a year ago the Azerbaijani-Turkish tandem unleashed  a large-scale military aggression against Artsakh. As a result of  this aggression, Azerbaijan occupied 75% of the territories of  Nagorno-Karabakh, tens of thousands of people lost their homes,  several thousand died, more than 10 thousand servicemen became  disabled.  The Azerbaijani Armed Forces are destroying the Armenian  historical and cultural heritage in the territories that have come  under their control. More than 4 thousand cultural, religious and  historical objects are under threat of destruction.