President about the war: We must be able to get out of this situation  by straightening our backs, albeit with slow steps, but moving  forward 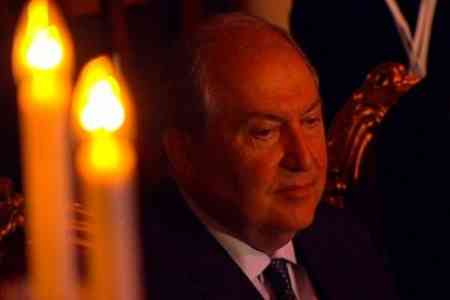 ArmInfo.''We must be able to get out of the current situation with our heads held high and, straightening our back, albeit in slow steps, but move forward>, -  wrote President of the Republic of Armenia Armen Sarkissian on the  occasion of the 44-day Artsakh war commemoration day.  Describing  this war as the most brutal in the country's recent history, the  President noted that he bows before the memory of all victims, their  families and relatives.

"A year after the war, in addition to thousands of victims and  wounded, we have sons who are still in captivity or are missing.  Today, as never before, we must make efforts in the name of returning  prisoners, healing the wounded, searching for the missing. In the  name of a strong Armenia and Artsakh, "he wrote.

To recall, exactly a year ago, on September 27 at 7:10 am, Azerbaijan  launched a large-scale aggression against the Nagorno-Karabakh  Republic. From September 27 to November 9, 2020, the Azerbaijani  Armed Forces, with the participation of Turkey and foreign  mercenaries, carried out aggression against Artsakh. The strikes were  carried out on civil and military targets in Nagorno-Karabakh and on  the territory of Armenia.  On November 9, 2020, the leaders of the  Russian Federation, Armenia and Azerbaijan signed a statement on the  cessation of all hostilities in Artsakh and the Armenian side made  territorial concessions.  According to the data of the Investigative  Committee of the Republic of Armenia, 3781 people died in the 44-day  war, 253 people were missing (231 military and 22 civilians). To  date, a total of 108 civilian military personnel and civilians have  been returned to the Republic of Armenia by the Republic of  Azerbaijan.