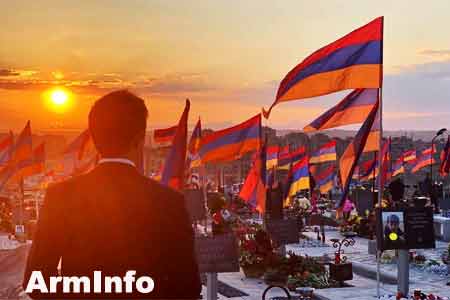 ArmInfo.On September 27, on the first anniversary of the 44-day Artsakh war, high-ranking officials of Armenia separately visit the Yerablur military pantheon.   This morning RA Prime Minister Nikol Pashinyan laid flowers at the  graves of the fallen soldiers in Yerablur.

On behalf of the  President of the Republic of Armenia Armen Sarkissian, a wreath was  laid at the Yerablur military pantheon at the memorial to the heroes  who gave their lives for the freedom and independence of the  Motherland. In his telegram channel, the President posted photographs  from the city of Shushi occupied by Azerbaijan and from other  territories of Artsakh and wrote: "My beautiful and beloved  Motherland." Deputy Prime Minister Suren Papikyan, Secretary of the  Security Council Armen Grigoryan, Minister of Territorial  Administration and Infrastructures Gnel Sanosyan and other officials  visited Yerablur.  The Yerablur military pantheon was visited by the  US Ambassador to Armenia Lynne Tracy, who also laid flowers at the  graves of the fallen soldiers.

To recall, exactly a year ago, on September 27 at 7:10 am, Azerbaijan  launched a large-scale aggression against the Nagorno-Karabakh  Republic. From September 27 to November 9, 2020, the Azerbaijani  Armed Forces, with the participation of Turkey and foreign  mercenaries, carried out aggression against Artsakh. The strikes were  carried out on civil and military targets in Nagorno-Karabakh and on  the territory of Armenia. On November 9, 2020, the leaders of the  Russian Federation, Armenia and Azerbaijan signed a statement on the  cessation of all hostilities in Artsakh and the Armenian side made  territorial concessions.

According to the data of the Investigative Committee of the Republic  of Armenia, 3781 people died in the 44-day war, 253 people were  missing (231 military and 22 civilians). To date, a total of 108  civilian military personnel and civilians have been returned to the  Republic of Armenia by the Republic of Azerbaijan.