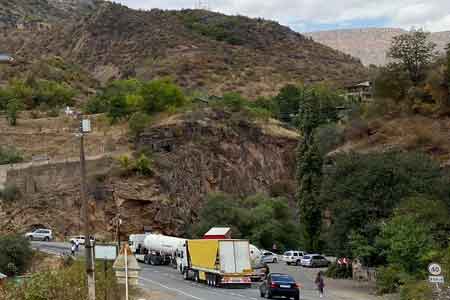 ArmInfo.During their meeting on the sidelines of the 76th session of the UN General  Assembly in New York, The Foreign Ministers of Armenia and Iran  Ararat Mirzoyan and Hossein Amir-Abdollahian, expressed satisfaction  with the high level of centuries-old Armenian-Iranian friendly  relations and the regularity of high-level contacts.

As reported by the press service of the RA MFA, the interlocutors  discussed the challenges related to transport transit from Iran to  Armenia and ways to overcome them.

Mirzoyan informed about the construction process of an alternative  road to replace the Goris-Kapan road section, as well as about the  work on the North-South highway.

The parties touched upon the possibilities of further deepening the  Armenian-Iranian cooperation in the energy sector.

Issues related to peace and stability in the region were also  discussed. The RA Foreign Minister stressed that the provocative  actions of Azerbaijan against the sovereign territory of Armenia  undermine the efforts aimed at sustainable security and development  in the region, adding that he highly values Iran's position on the  territorial integrity of Armenia.

It should be noted that the 21 km section of the Goris-Kapan  interstate road in the Syunik region of the Republic of Armenia,  which came under the control of Azerbaijan, after Azerbaijan's  large-scale military aggression against Artsakh, created a number of  problems for the Armenian-Iranian cargo transportation.

Since mid-September, the security forces of Azerbaijan have set up  checkpoints on this section, stop Iranian trucks passing through this  territory and demand tax payments from them for traveling along this  section of the road. The amount ranges from $ 100 to $ 300. Moreover,  two Iranian drivers were detained by Azerbaijani police for carrying  out cargo transportation in Artsakh. An alternative to this road is  the road through the Tatev community, which is not suitable for the  passage of heavy trucks.