Government defends its position on community enlargement in  parliamentary hearings 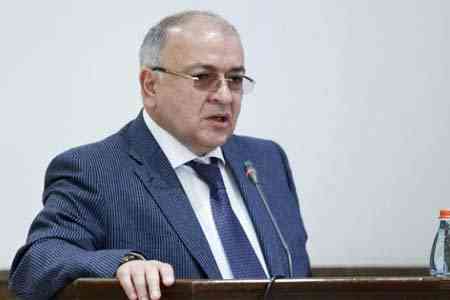 ArmInfo.The logic of the current system of administrative- territorial division of Armenia should be revised in order to ensure the efficiency of the  functioning of local self-government bodies.

This opinion was  expressed by Deputy Minister of Territorial Development and  Infrastructures Vache Terteryan on September 22 at the parliamentary  hearings on the enlargement of the republic's communities, initiated  by the Standing Parliamentary Commission on Territorial  Administration, Local Self-Government, Agriculture and Environmental  Protection of the National Assembly.  The Deputy Minister stressed  that the situation in which the current system of local  self-government was formed in Armenia back in 1996 (about 931  communities - ed.) Was completely different - it corresponded to that  time and the existing economic system. New conditions and new  challenges, as Terteryan pointed out, require a revision of the  existing mechanism.

The process, which started especially actively since 2016 (as a  result of the unification of 486 communities, 54 enlarged communities  were created - ed.), According to him, will lead to the  decentralization of communities, and the opportunities for economic  development of communities will increase. They will participate more  effectively in the government's subvention programs, which was  practically impossible in the case of small communities; the problem  of the lack of specialists in the villages will be solved.  However,  in response to the request of the director of the Mkhitar Sebastatsi  school, Ashot Bleyan, Vache Terteryan could not point to a successful  example of a pilot project implemented in an already enlarged  community.  To recall, on September 8, the government approved a  package of amendments to the law "On the administrative-territorial  division of the Republic of Armenia" and "On local self-government",  according to which, as a result of the unification of 441 communities  in Armenia, there will be 37 communities. The remaining 404  communities will have the status of a settlement, where instead of  the head of the community, there will be an administrative  representative, and the head and the Council of Elders of the  enlarged community will manage the budget.

After the completion of the entire process, there will be 77 enlarged  communities in Armenia, not counting Yerevan.

As Prime Minister of Armenia Nikol Pashinyan stated at the government  session, the initiative is important not only from the point of view  of carrying out administrative-territorial reforms, but also within  the framework of the logic of political changes. Thus, according to  the project, oppositionists will also be represented in the councils  of elders of the enlarged communities in accordance with the votes  received at the elections. And Armenian Minister of Economy Vahan  Kerobyan stressed that as a result of this process, the resources of  the enlarged communities will be consolidated, thereby increasing  their ability to attract investments. At the same time, Pashinyan  touched upon the possible dissatisfaction of citizens with the  upcoming changes, saying that there is a decision of the  Constitutional Court that holding a local referendum on this issue is  unconstitutional and consolidation as a political process will be  decided only in the sphere of the National Assembly. The political  decision has already been made, the prime minister said.

Meanwhile, people in the unified villages are dissatisfied. They cite  the example of communities that were enlarged back in 2016-2017,  noting that they did not receive any benefit from this. On September  16, residents of the Geghamasar community of Gegharkunik region  blocked the Sotk-Vardenis road, opposing the enlargement of the  communities.  To note, if this draft is adopted by the National  Assembly, in all 37 newly formed communities, even if the term of  office of the head of the community has not expired, elections to the  Council of Elders will be held in the near future according to party  lists. The candidate for the party with the highest number of votes  will lead the community. Moreover, among the enlarging communities  there are those that have already been enlarged in the past, this  time new communities will be added to them.