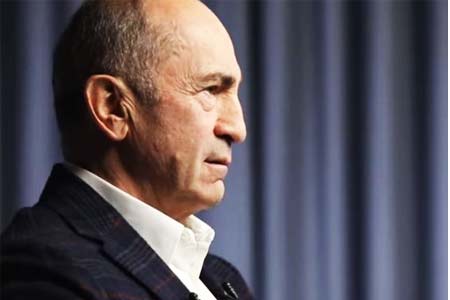 ArmInfo.The first instance court refused to give permission to the second president, Robert Kocharian, to travel to Moscow.

As stated in the statement of the Hayastan bloc, whose leader is  former President Robert Kocharian, the ruling United Russia party of  the Russian Federation sent an invitation to Kocharian to visit  Moscow about a week ago. "It was expected that during the visit,  which was to start on September 19, not only inter-party cooperation,  but also a wide range of other issues were to be discussed with the  Russian side. However, the RA Court of First Instance refused to  issue permission for Robert Kocharian to travel abroad. We are forced  to cancel the meeting, "the statement reads.  Meanwhile, as noted  by"Hayastan", there were no legal reasons for the refusal by the  court, since former-President Kocharian had already traveled to  Moscow several times, and the court did not record any problems. "We  are witnessing yet another pressure from the authorities on the  court, which is aimed at limiting the political activities of the  Hayastan bloc. We regard what is happening as another manifestation  of the authorities' personal enmity and another proof of the complete  absence of state thinking," the bloc's press service said.