Member of NA: Baku`s threat to file a counterclaim against Armenia at  the UN International Court of Justice does not fit into the framework  of international law: 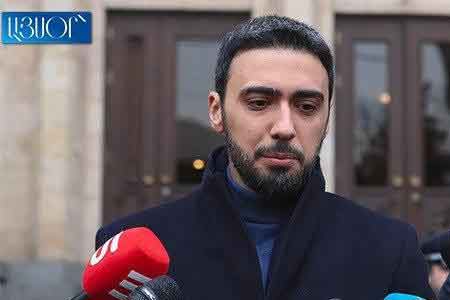 ArmInfo.The intention of Azerbaijan to file a counterclaim against Armenia on the same grounds as the claim of the RA in the UN International Court of Justice  against Azerbaijan is outside the scope of international law. This  opinion was expressed by the lawmaker of the "Hayastan" opposition  faction of the RA National Assembly, lawyer Aram Vardevanyan on  September 17.

Earlier it was reported that the Republic of Armenia  filed a lawsuit with the UN International Court of Justice, accusing  Azerbaijan of violating the International Convention on the  Elimination of All Forms of Racial Discrimination (CERD). As stated  in the official statement of the international court, in the  statement the Armenian side claims that for decades Azerbaijan has  subjected the Armenian people to racial discrimination, and that as a  result of the state-sponsored hate policy towards the Armenians, the  latter have been subjected to mass killings, torture and other  crimes. In addition, the statement says that these violations again  came to the fore in the course of the conflict initiated by the  Azerbaijani side in September 2020, which once again grossly violated  the Convention (CERD). The purpose of the lawsuit is to protect the  rights of Armenia and Armenians from further infringements, as well  as to prevent the aggravation of disagreements. As a result, Armenia  demanded that the UN International Court of Justice introduce  temporary measures against Azerbaijan, marking this as a matter of  extreme urgency.  Reacting to this information, the Azerbaijani  Foreign Ministry, represented by the head of the press service  department Leyla Abdullayeva, told reporters that "in addition to the  lawsuit filed by Azerbaijan against Armenia in the European Court of  Human Rights in January this year, Azerbaijan will go to court in the  coming days to hold Armenia accountable for the systematic violation  of the International Convention on the Elimination of All Forms of  Racial Discrimination (ICERD) ". She noted that "after the cessation  of the illegal occupation of the Azerbaijani territories by Armenia,  the facts of gross violations of human rights against Azerbaijanis  were carefully collected and documented." "This includes cases of  forced expulsion, ill-treatment, torture, and murder of Azerbaijanis  because of their ethnicity," she said, adding that "after the signing  of the trilateral statement, Armenia continued to violate ICERD,  preventing the return of Azerbaijani displaced persons by mining the  former occupied territories and refusing to provide Azerbaijan with  maps of mined areas. "

Aram Vardevanyan reminded today that in one of his speeches he gave a  clear assessment to high-ranking officials of Azerbaijan and Turkey,  calling them international criminals, for which he was accused by  representatives of the ruling faction of "violating the presumption  of innocence." "I believe that the complaint presented in this logic  is logical. Of course, the legal process is multi-layered, but I  think it could have been presented earlier," he said.  Touching upon  the statement of the Azerbaijani Foreign Ministry, he called it  nonsense, which is outside the legal processes, especially  international law. "For the world community, I think it is clear and  obvious which side, more precisely Azerbaijan, committed a number of  violations of international law: violation of the principle of  prohibition of the use of force, not to mention a gross violation of  the right of nations to self-determination, which continues to this  day."

At the same time, Vardevanian does not understand why Armenian  officials do not give such harsh assessments when expressing their  positions.