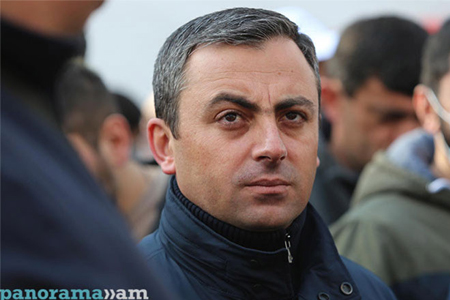 ArmInfo.The parliamentary opposition's promised discussion on the situation on the Goris-Kapan highway never took place, said Ishkhan Saghatelyan, Deputy Speaker of  the National Assembly of Armenia, lawmaker of the Hayastan faction,  on September 17 at a briefing.  "A week later, despite the consent of  the ruling force, the discussion in parliament on the situation on  the Goris- Kapan highway with the participation of the heads of the  National Security Service and the Ministry of Defense did not take  place," he said.

As Saghatelyan noted, the Armenian authorities are unable to serve  the interests of the Armenian people and Armenia. "Instead, they  claim that these territories are Azerbaijani, which, in our opinion,  is a classic example of treason," he said.

On September 12, the National Security Service of Armenia reported  that from 12:00 on September 12, the Azerbaijani police began to stop  trucks with Iranian numbers "on the section of Eyvazli controlled by  it" (near the Armenian village of Vorotan) of the Goris-Kapan  highway. In connection with the situation on September 13, the  parliamentary faction "Hayastan" ("Armenia" -ed. note) demanded to  find a format for organizing a discussion of the situation. As  Artsvik Minasyan stated, the report of the NSS of Armenia not only  does not follow from the national interests of the Republic of  Armenia, but "it is toothless and about nothing," moreover,  "Azerbaijani terminology is fully used in the report of the NSS." It  turned out that the Azerbaijani military was stopping Iranian trucks  and demanding a fare from them. A day later, they detained two  Iranian drivers on a section of the Goris- Kapa highway, accusing  them of transporting goods to Stepanakert. As stated in the State  Customs Committee (SCC) of Azerbaijan, Baku established control on  the section of the Goris-Kapan road passing through the Syunik region  of Armenia, "in accordance with the Azerbaijani tax code. And  vehicles are subject to road tax, as well as the state duty for  obtaining a permit. regulating international road transport on the  territory of Azerbaijan ". On September 14, the opposition of Armenia  and the authorities, according to the report, came to a common  denominator on the issue of holding this discussion in a closed  format.

Nevertheless, on September 15 in parliament, Armenian Prime Minister  Nikol Pashinyan referred to the borders of Soviet Armenia and stated  that the country would stubbornly follow the strategy of establishing  a strong peace in the region and urged the deputies not to give a  reason for a different understanding of the situation. He said that  "we need strong nerves" in order not to succumb to provocations  today. And Deputy Prime Minister Suren Papikyan, in an interview with  journalists, when asked whether Azerbaijanis will remain on a number  of sections of the Goris- Kapan road, noted that Armenia cannot make  a decision regarding "police stations operating on the territory of  Azerbaijan." According to him, although the countries did not go  through the process of delimitation and demarcation, but on this  section the road existing between Soviet Azerbaijan and Soviet  Armenia has already been preliminarily outlined.