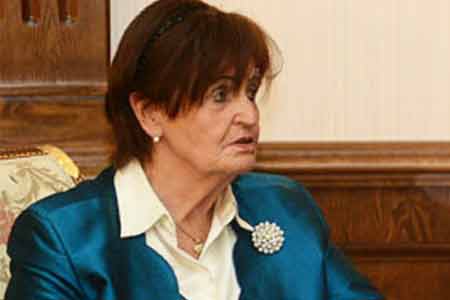 ArmInfo. On September 16, the President of the RA National Assembly Alen Simonyan received the Delegation headed by the Member of the House of Lords of Parliament  of the United Kingdom of Great Britain and Northern Ireland, Baroness  Caroline Cox.

As the press service of the RA NA reports, welcoming the guests, Alen  Simonyan has noted that it is an honour for him to host the Armenian  people's great friend. He has stated that the ides that the Armenian  people's faithful friend Caroline Cox enjoys wide recognition and  love is not exaggerated. Alen Simonyan expressed his gratitude to  Baroness Cox for consistently supporting Armenia and Artsakh for many  years.

The NA President and Baroness Cox discussed the issues on the  situation created as a result of war, the prisoners of war and the  civilians detained by Azerbaijan.

The Baroness expressed concern over destructive statements being  sounded on the international different platforms by Azerbaijan, at  the same time hoping that with the practical support of the  international community it would be possible to solve the issue of  the captives' repatriation.

At the end of the meeting an agreement was reached on further  cooperation.