Ani Ispiryan was appointed Deputy Minister of Economy of Armenia. 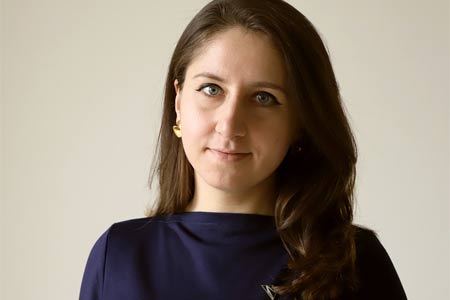 ArmInfo.Ani Ispiryan was appointed Deputy Minister of Economy of Armenia.

According to the official website of the government, the  corresponding decision was signed by Prime Minister Nikol Pashinyan  on September 14.

Ani Ispiryan was born in 1992 in Yerevan, in 1999 she moved to Moscow  with her family. Graduated from the Faculty of Economics of Lomonosov  Moscow State University (bachelor's and master's degrees in  economics, honors degrees). She also studied at the Paris Business  School under the program "Financial Economics". Research interests  are monetary and fiscal policy, institutional economics, financial  markets.

She began her career at the research institute of the Ministry of  Industry and Trade of the Russian Federation, moving up from a junior  researcher to the head of the risk management department for  investment projects in the military-industrial complex. She is the  author of a number of scientific articles devoted to the problems of  this industry. Within the framework of the "iGorts" program, she  worked in the Ministry of Economy of the Republic of Armenia on the  development of investment policy, she supported specific investment  projects, and also provided consulting support in current issues.