Slovakia values Armenia`s efforts to bring stability and peace to the  region: Korczak 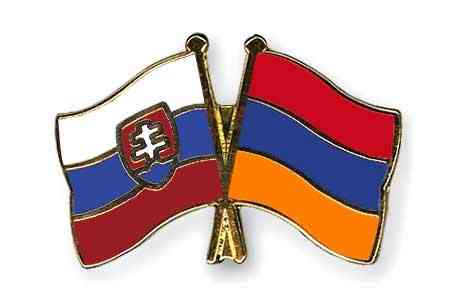 ArmInfo. On September 14, Armenian Prime Minister Nikol Pashinyan received a delegation led by Slovak Foreign Minister Ivan Korczak, who arrived in Yerevan on an  official visit.  During the meeting, Pashinyan touched upon the  situation in the region as a result of the aggression unleashed by  Azerbaijan against the Republic of Artsakh, Azerbaijan's failure to  fulfill the agreements on the return of Armenian prisoners of war and  the invasion of Azerbaijani troops into the sovereign territory of  Armenia.

The head of government stressed the need to resume the  negotiation process within the framework of the OSCE Minsk Group  co-chairmanship. He also touched upon the cooperation between Armenia  and the European Union, stressing the importance of the assistance  provided to the reforms for the development and strengthening of  democracy in Armenia.

The Minister of Foreign Affairs of Slovakia noted the interest of his  government in the development of multilateral cooperation with  Armenia. Korczak stated that Slovakia appreciates Armenia's efforts  aimed at establishing stability and peace in the region and noted the  importance of a comprehensive settlement of the Nagorno-Karabakh  conflict within the framework of the OSCE Minsk Group  co-chairmanship. The Foreign Minister of Slovakia considered it  necessary to build confidence in the region, expressing his country's  support for the efforts of the OSCE Minsk Group co-chairs.