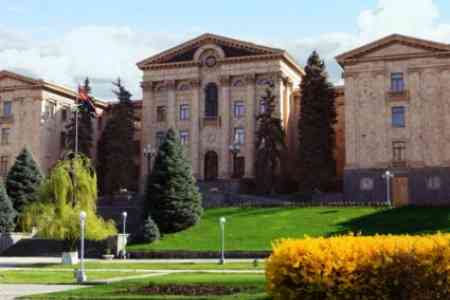 ArmInfo.The ruling Civil Contract faction and the parliamentary opposition came to a common denominator on the issue of holding a discussion in connection with  the situation on the Goris-Kapan road with the participation of the  heads of the National Security Service and the Foreign Ministry, SRC  and the Prosecutor General of the Republic of Armenia. Secretary of  "Hayastan" faction Artsvik Minasyan said this at a briefing with  journalists.

On September 12, the National Security Service of Armenia reported  that from 12:00 on September 12, the Azerbaijani police began to stop  trucks with Iranian numbers on the section of Eyvazli (near the  Armenian village of Vorotan) of the Goris-Kapan highway under its  control. In connection with the situation the day before, the  "Hayastan" ("Armenia" -ed. note) parliamentary faction demanded to  find a format for organizing a discussion of the situation. As  Artsvik Minasyan stated, the report of the NSS of Armenia not only  does not follow from the national interests of the Republic of  Armenia, but "it is toothless and about nothing," moreover,  "Azerbaijani terminology is fully used in the report of the NSS."  Meanwhile, during this period, according to him, the Armenian  authorities did not come up with a detailed explanation of the  situation, he said. Vahe Hakobyan, a deputy from "Hayastan", former  governor of Syunik region, told reporters, "in the conditions of  permissiveness, the Azerbaijani side becomes impudent, stops Iranian  trucks, then, in order to be allowed further travel to Yerevan, they  have to pay a kind of customs duty."

To note, according to the media, earlier the Azerbaijani Defense  Ministry sent letters to the Russian defense department and the  command of the peacekeeping forces in Nagorno-Karabakh about "illegal  passage of vehicles belonging to other countries to the territory of  Azerbaijan, where Russian peacekeepers are temporarily deployed." In  the letters, according to Interfax.az, it was noted that "such cases  contradict the trilateral statement signed by the presidents of the  Republic of Azerbaijan and the Russian Federation and the Prime  Minister of Armenia on November 10, 2020. They asked to prevent such  cases." The Azerbaijani Defense Ministry stressed that "legal  entities and individuals of other countries and their vehicles cannot  enter the territory of Azerbaijan without the consent of Baku, such  cases are a violation of the laws of the country."

On September 13, the State Customs Committee (SCC) of Azerbaijan  announced that Baku had established control on the section of the  Goris-Kapan road passing through the Syunik region of Armenia "in  accordance with the Azerbaijani tax code." "According to the code,  vehicles are subject to road tax, as well as a state duty for  obtaining a permit regulating international road transport in  Azerbaijan," the ministry said.