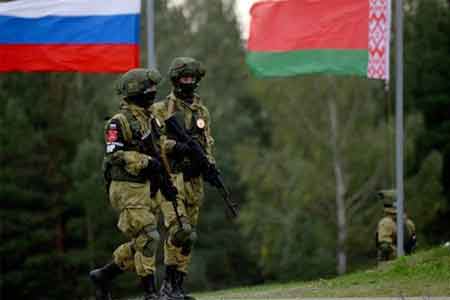 ArmInfo.The experience of military operations in Syria and Nagorno- Karabakh is being used at the Russian-Belarusian "West-2021" exercises. This is stated in the  message of the RA Ministry of Defense.

Thus, the Armenian Defense Ministry informed that RA Defense Minister  Arshak Karapetyan watched the main stage of the "West 2021" joint  strategic exercise of the armed forces of Russia and Belarus at the  Mulino military training ground in Nizhny Novgorod.  In addition to  Russia and Belarus, the armed forces of Armenia, India, Kazakhstan,  Kyrgyzstan and Mongolia are also taking part in the exercises.

On the Armenian side, a battalion consisting of tank, motorized rifle  and artillery units participates in the exercises.  "The exercises  are based on the experience of recent hostilities, in particular, in  the Syrian Arab Republic and the Republic of Artsakh. New methods and  methods of joint operations have also been developed," the RA  Ministry of Defense said.

The servicemen will practice repelling an enemy offensive, conducting  a mobile defense, delivering a concentrated fire strike and routing a  mock enemy grouping that wedged in.

The exercises are held from September 10-16 at nine military training  grounds in Russia, in the Baltic Sea and at five training grounds in  Belarus. About 200 thousand military personnel, 80 aircraft and  helicopters, 760 units of military equipment, 15 ships will take  part.