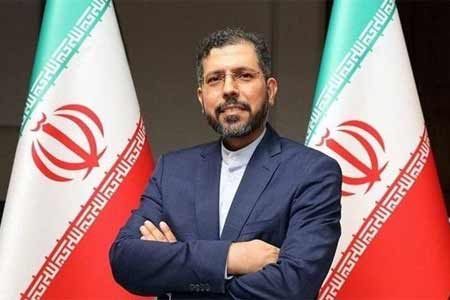 ArmInfo.Iran's Foreign Ministry spokesman Saeed Khatibzadeh reacted to the situation with Iranian heavy trucks on the Goris-Kapan road of the Syunik region of  Armenia.

Thus, according to the Iranian media, commenting on the situation,  Khatibzadeh said that relations with neighbors are a priority for  Iran, which is reflected as the fundamental approach of President  Ebrahim Raisi's foreign policy.

"We are trying to use the capabilities of the Islamic Republic of  Iran for regional development, peace and stability with the  participation of all neighbors. In particular, our relations with  Armenia, as well as with our other neighbors, are on the agenda,"  Khatibzadeh said.

On September 12, it became known that the Azerbaijani police on the  Goris-Kapan road of the Syunik region of Armenia were stopping  Iranian trucks to check documents and cargo. This information was  confirmed by the NSS of Armenia as well.

Meanwhile, the Armenian media disseminated information that "the  Azerbaijani security forces at their checkpoint" in Vorotan are  demanding from Iranian trucks an amount equivalent to 50,000 AMD to  allow them to cross the road.  Moreover, photo evidence was presented  that the driver paid 50,000 and he was given a corresponding receipt  for payment. The top leadership of Armenia has so far kept a deathly  silence in connection with the current situation.