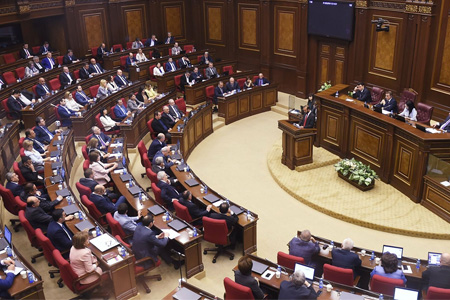 ArmInfo.At the National Assembly of Armenia, the work of the meeting of the first session, which began on August 2, continues. Today, on the 4th day of work, the National  Assembly will elect the third Deputy Speaker, but this time from the  opposition.

On August 3 and August 4, parliamentarians secretly voted in secret  the candidates from the ruling Civil Contract faction - Ruben  Rubinyan (Chairman of the NA Standing Committee on Foreign Relations  of the previous parliament) and Hakob Arshakyan (former Minister of  High Technologies). Yesterday, the opposition "Hayastan" and "I Have  Honor" factions nominated a single candidate for the post of the  third deputy chairman of the National Assembly - Ishkhan Saghatelyan  from the opposition "Hayastan" faction (representative of the ARF  "Dashnaktsutyun" Supreme Council, previously coordinating the protest  actions of the "Movement for the Salvation of the Fatherland").