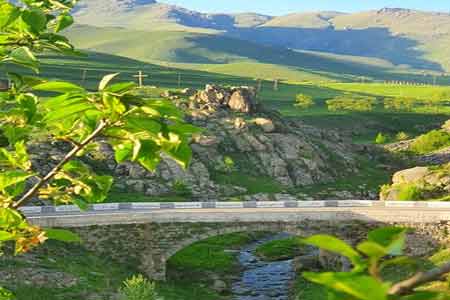 ArmInfo. Field work on sampling for the study of  chemical pollution of the territories of the Lori region, which is  under the influence of the mining and metallurgical industry, has  been completed.

As the "EcoLur" NGO told ArmInfo, a total of 136 samples were  collected, which included samples of house dust, soil, sediments,  dairy products and biomaterials (human urine and hair). The research  was carried out from July 28 to August 2 in 12 communities and  settlements of Lori Region: Alaverdi, Haghpat, Sanahin, Akori,  Shnogh, Teghut, Akhtala, Mets Ayrum, Pokr Ayrum, Shamlukh, Armanis  and Mghart, which are under the influence of mining and metallurgical  enterprises  "Sagamar" CJSC, "Teghut" CJSC and  "Akhtala Mining And  Processing Enterprise" CJSC.

According to the report, all samples were sent to the Czech Republic  to the certified laboratory of the Health Institute at Usti nad  Labem. First of all, the samples will be examined for the content of  elements characteristic of the mining and metallurgical industry -  arsenic, cadmium, copper, zinc and lead. "We have been working in  this region for several years, and each study complements the  previous ones, in order to obtain as much data as possible on the  spread of pollution in the most vulnerable areas, thereby raising  awareness of the population about the risks to health and the  environment," said representative of the Czech "Arnika" organization  on chemical safety Valeriya Grechko.

Unlike previous years, this year the geography of the study was  expanded. Residents of the villages Armanis, Mghart, Shnogh and  Teghut participated in the selection of biomaterials for the first  time.

"The research conducted in recent years is increasingly attracting  public interest. Since there are no state mechanisms in Armenia to  assess the impact of the mining industry and pollution on human  health, the research results are the only evidence in the protection  of rights, both in state institutions and  in the courts. In  addition, the results of the study directly affect state policy, work  is underway to introduce mechanisms for assessing the impact of  pollution on the environment and human health, "said Oleg Dulgaryan,  president of the "Centre for Community Mobilization and Support" NGO.

The field work was also observed by Consul of the Czech Embassy in  Armenia Ms. Ani Saginjanova, wife of the Ambassador Extraordinary and  Plenipotentiary of the Czech Republic to Armenia Mme.  Eleonora  Kopecka,  head of the administrative and financial department of the  Embassy of the Slovak Republic in Armenia Dagmar Polakova, who were  on a visit to Lori Region.

Scientific data obtained from the study of chemical pollution, the  sources of which are the objects of mining and metallurgical  enterprises - deposits, tailings, dumps and waste rock, production,  etc., will be presented for discussion by interested parties.  Meetings with local residents and administrations, with responsible  government agencies and the public are coming, during which a policy  will be developed to protect the environmental rights of people and  reduce the risks from environmental pollution.

The research is being carried out by Czech "Arnika"  non-governmental  organization, together with the Community Mobilization and Support  NGO (CCMS) and the "EcoLur" information NGO within the framework of  the Program for Assistance in Transformation, implemented with  financial support from the Ministry of Foreign Affairs of the Czech  Republic.