Ambassador of the Russian Federation: Overcoming the transport  blockade will allow unlocking the potential of Armenia as a very  promising economic operator 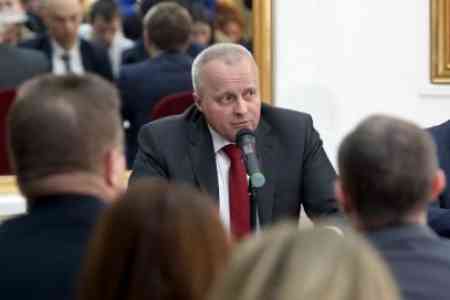 ArmInfo.Objectively, the region, Russia, and the international community are interested in the Transcaucasia becoming not only a region of peace and stability, but  also successfully, dynamically developing, thereby contributing to  international economic relations. Ambassador Extraordinary and  Plenipotentiary of the Russian Federation to Armenia Sergei Kopyrkin  stated this in an interview to Public Television.

"For us, this is still of particular importance, because Armenia,  like Russia, is a member of the Eurasian Economic Union, this is a  matter of regional integration.

Unblocking ties will have a positive effect on the integration  processes within the framework of our Union>, - he said. In this  context, he pointed to ties with Iran, which for Russia is a very  important partner in economic and political terms.  Noting that  unblocking roads for Russia is a pressing issue, Kopyrkin stressed  that the Russian side, despite all the contradictions, is making  active efforts to start this process.

"It is very important for Armenia to overcome this transport  blockade, this will immediately allow unlocking the potential of the  Armenian people, Armenia, as a very promising economic operator," the  Ambassador noted.