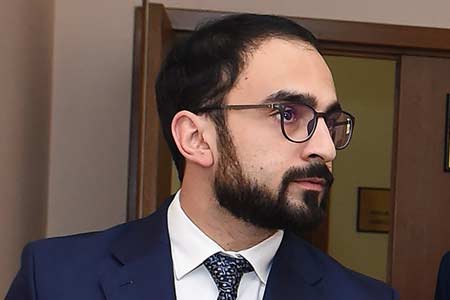 ArmInfo. Tigran Avinyan leaves the post of Deputy Prime Minister, but will remain a member of the board of the Civil Contract party. At the same time, according to him, he  did not participate in the election campaign, since he had some  disagreements with the team on the electoral list. Tigran Avinyan  announced this on his Facebook page.

He noted that at the beginning of the electoral process, he decided  to focus on fulfilling his official duties, refraining from  participating in the election campaign. The decision was prompted by  controversy over the electoral list.

"Our struggle is based on the principles of democracy, freedom and  the eradication of corruption. In this context, the priority of this  stage of development of our state is the establishment and  strengthening of democracy (free, fair and transparent elections),  the eradication of corruption (an irreconcilable fight against  corruption). Among these, the fundamental principle is also the  separation of business and politics, regardless of personality.  However, in the case of the electoral list, I was not sure that this  principle was observed and we did not deviate from it in any way, "  he wrote.

Nevertheless, Avinyan is convinced that the separation of business  and politics will remain an unshakable principle of the team, and  potential risks will be eliminated. "I myself will remain a member of  the board of the Civil Contract party, I will do my best to support  all our reforms in 2018 to continue," Tigran Avinyan said.  Leaving  the post of RA Deputy Prime Minister, Avinyan assesses the three-year  work as effective, speaks of progress in coordinated areas. "First of  all, in the course of the fight against coronavirus, we were able to  prevent a possible economic collapse. Moreover, we did not allow a  worsening of the situation with anti- crisis economic development  programs in the social sector, agriculture, energy, urban planning,  while creating real preconditions for development. I also consider it  important to develop a strategy for public administration reform and  advances in digitalization. All this creates an excellent basis for  building the state we dream of, "he said.

Avinyan is convinced that the work of the past three years will have  a significant impact on the transformation of Armenia into a  prosperous, competitive institutional state. He wished success to the  newly elected National Assembly and the newly formed government in  its work for the benefit of the Republic of Armenia and its people.   Yesterday, it was reported that the acting Deputy Speaker of Armenia  Tigran Avinyan dismissed all his advisers and assistants: head of the  office Bagrat Badalyan, assistants Gevorg Sahakyan, assistant Lusine  Dayan, advisers Sona Tevanyan and Vahan Hunanyan were dismissed.

Earlier, the media have repeatedly written that after the elections  Avinyan will leave his post in the Cabinet and go to work in the  private sector. There was information that Avinyan would take a  leading position in a telecommunications company. Even before the  elections, it was reported about disagreements with the Prime  Minister over the inclusion of business representatives, in  particular Khachatur Sukiasyan and Gurgen Arsenyan, in the electoral  list of the ruling party. The media also reported on the competition  between Avinyan and Sukiasyan over the post of the mayor of the  capital.