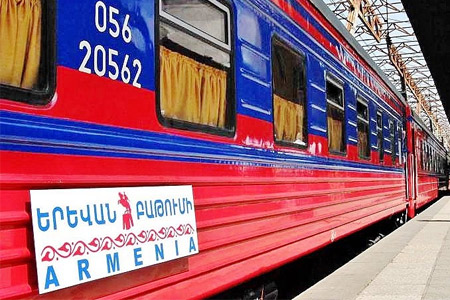 ArmInfo.Armenia and Georgia are considering the possibility of launching a high-speed train running between Yerevan and Tbilisi, the travel time of which would  be 2.5-3 hours. This was discussed during the meeting of the Minister  of Economy of Armenia Vahan Kerobyan with the Minister of Economy and  Sustainable Development of Georgia Natela Turnava in the Georgian  capital.

According to the press service of the Ministry of Economy, the  implementation of this initiative, in the opinion of the parties,  will contribute to the development of tourism.

During the meeting with his Georgian counterpart, Kerobyan also  proposed to discuss the possibilities of implementing a number of  other joint projects in the tourism and energy sectors.  In this  regard, the minister stressed: "Our countries, individually, are  relatively small markets, but together we can be more attractive in  the region."

On the same day, Vahan Kerobyan met with the Minister of Finance of  Georgia Lasha Khutsishvili. It is reported that the parties discussed  a number of important issues in the tax and customs fields, as well  as problems related to transit traffic through the territory of  Georgia.

On the last day of his stay in Georgia, the Armenian Minister of  Economy met with Deputy Prime Minister, Minister of Environment  Protection and Agriculture of Georgia Levan Davitashvili, as well as  Minister of Infrastructure and Regional Development of Georgia Irakli  Karseladze.

According to the press service of the Ministry of Economy, issues of  regional cooperation, as well as opportunities for cooperation in the  field of agriculture were discussed with the Georgian partners.  It  should be noted that the delegation of the Ministry of Economy of  Armenia headed by Vahan Kerobyan was in Georgia on a working visit  from July 29 to 30, where discussions were held with Georgian  colleagues concerning the prospects of Armenian-Georgian cooperation  in the trade and economic fields.  According to the Statistical  Committee of the Republic of Armenia, in January-May 2021, the trade  turnover between Armenia and Georgia increased by 28.7%, providing a  volume of $ 59.5 million. At the same time, exports amounted to $  24.5 million, with an annual growth of 17.4%, against the background  of an increase in imports by 38% to $ 35 million.