MPs from "Civil Contract" did not elect speaker of parliament: an  additional meeting will be held from 6:30pm to 8:00pm 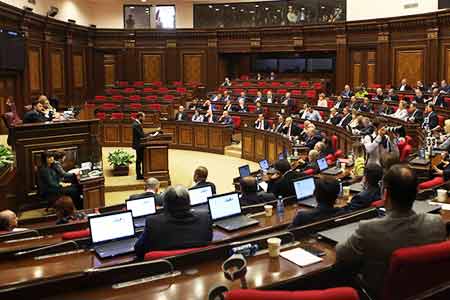 ArmInfo. The MPs from the ruling "Civil Contract" did not elect the speaker of parliament, due to a typo in the name of one of the opposition candidates. The name of the  candidate was never announced.

At the moment, a second secret ballot is being held in the National  Assembly to elect the Speaker of the of the Parliament of the 8th  convocation. It will last 30 minutes.

The ruling majority also came up with an initiative to hold an  additional meeting today from 6:30pm to 8:00pm.

Earlier, the parliamentary forces nominated their candidates for the  post of Speaker of the National Assembly: the parliamentary majority  - the Civil Contract faction nominated the deputy speaker of the 7th  convocation parliament Alen Simonyan, the Hayastan opposition faction  nominated the former head of the Meghri community Mkhitar Zakaryan,  and the opposition ' I Have the Honor "- the former head of the  Sisian community, Artur Sargsyan. Zakaryan and Sargsyan, despite  their parliamentary mandates and, accordingly, parliamentary  immunity, are under arrest. As the lawyer, now the lawmaker from  "Hayastan" Aram Vardevanian, stated, the immunity of the lawmaker can  be overcome only with the consent of the National Assembly of  Armenia. At the same time, as the MP pointed out, the process of  electing the Speaker of the Parliament in the absence of Mkhitar  Zakaryan and Artur Sargsyan cannot be legal, since the NA regulations  oblige to ensure the presence of candidates so that the latter can  present their program to parliamentarians.

As a result, even before the start of voting on the election of the  NA Speaker, the parliamentary opposition - the Hayastan bloc and the  I Have Honor Alliance - demonstratively left the session hall in  protest against the discussion of the government's candidacy for the  Speaker of the National Assembly in the absence of opposition  candidates.