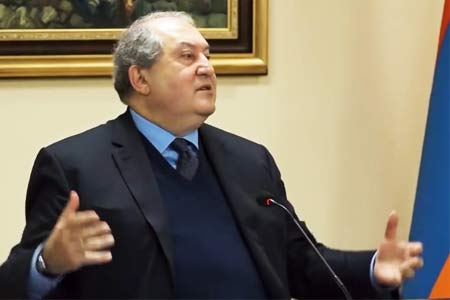 ArmInfo. Today, on August 2, Armenia's President Armen Sarkissian, signed a decree on the appointment of the Minister of Defense, Environment, Labor and Social  Affairs, as well as the Deputy Prime Minister.

Earlier, Armen Sarkissian signed a decree appointing Nikol Pashinyan  as Prime Minister. Then, at the suggestion of Pashinyan, he appointed  Arshak Karapetyan, who was earlier dismissed by the decision of the  Prime Minister from the post of First Deputy Defense Minister, to the  post of the head of the Defense Ministry. Narek Mkrtchyan, previously  dismissed from the post of first deputy minister, will head the  Ministry of Labor and Social Affairs, while Romanos Petrosyan will  head the Ministry of the Environment.

By the decree of the President of the Republic of Armenia, acting  Minister of Territorial Administration and Infrastructures Suren  Papikyan was appointed Deputy Prime Minister of Armenia.