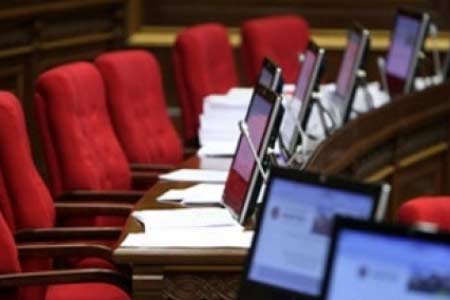 ArmInfo. The parliamentary opposition - the "Hayastan" and the "I Have Honor" blocs today at the first session of the 8th parliamentary convocation demonstratively  left the session hall in protest against the discussion of the  candidacy for the post of Speaker of the National Assembly from the  authorities in the absence of opposition candidates.

Earlier, the parliamentary forces nominated their candidates for the post of  Speaker of the National Assembly: the parliamentary majority - the  Civil Contract faction nominated the deputy speaker of the 7th  convocation parliament Alen Simonyan, the Hayastan opposition faction  nominated the former head of the Meghri community Mkhitar Zakaryan,  and the ' I Have Honor "- former head of the Sisian community, Artur  Sargsyan.  To note, the former mayors of the cities of Syunik region,  who are members of parliament from the opposition "Hayastan" bloc,  are under arrest. Opposition representatives argue that MPs can only  be detained with the permission of the legislature. Opposition MP  Elinar Vardanyan stated that the MP's immunity cannot be violated by  the decision of the CEC. Meanwhile, the authorities are countering -  Zakaryan and Sargsyan were charged while the latter was still a  candidate for parliament, as a result of which the prosecution's  petition was submitted and approved by the RA CEC.

According to the regulations, Zakaryan and Sargsyan must come to  parliament and present their programs, otherwise, as opposition MPs  stated, voting will become a violation of the regulations, and the  election results will be illegitimate.