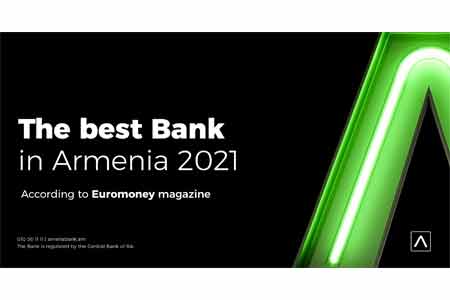 ArmInfo.Ameriabank receives Euromoney Award for Excellence 2021 as the Best  Bank in Armenia. As ArmInfo was told in the press service of  Ameriabank, the Bank is honored to receive this reputable award given  the significantly improved profitability, robust growth, strategic  relationships and commitment to enhancement of its digital channels.   The Bank receives this recognition for the 8th time already over the  last ten years.

As mentioned by the organizers, this year was special, as they  registered a record number of pitches for the Awards for Excellence.

Artak Hanesyan, CEO of Ameriabank, commented: "We are truly honored  to earn this recognition in these challenging times. We have proved  our resilience and maintained strong performance even in the most  unprecedented economic conditions, and are more than ever committed  to delivering our strategic goals."

To note, before the "Excellence" award as the best bank of the year  in Armenia was awarded to Ameriabank from Euromoney in 2011, 2012,  and annually in 2014-2019. Ameriabank CJSC is a universal bank  providing investment, corporate and retail banking services in the  form of a comprehensive package of banking solutions. Ameriabank  maintains leadership in the Armenian banking market in terms of key  indicators. As of April 1, 2021, the bank's shareholders are Imast  Group (C-Y) Limited (previous name - Ameria Group (C-Y) Limited) -  48.90%, EBRD - 17.74%, Asian Development Bank (ADB) - 13, 93%, ESPS  Holding Limited - 11.92%, Afeyan Foundation for Armenia Inc. - 7.51%.

To recall, Euromoney magazine has been published in London since 1969  and is considered one of the most significant and authoritative  publications on banking, finance and investments. Every year it  selects the best organizations in the field of finance and  investment. The winners are determined in three stages:  first, they  study the annual reports, then they interview the bank's partners at  home and abroad, after which the experts of the magazine analyze the  financial indicators and evaluate the key strategic initiatives of  the participating banks. The annual Euromoney Awards for Excellence  is presented to the best banks in the world. Not only financial  indicators are important, but also the professionalism of management  and personnel, transparency of transactions, etc. The best banks in  the world are annually found by the British magazine Euromoney in 100  countries - from Argentina to Norway. The Euromoney Award for  Excellence, established in 1992, was the first such award in the  global banking industry, and is highly respected as a kind of  financial Oscar. The prestigious annual prize is awarded based on the  analysis of the activities of candidates (banks, brokerage and dealer  companies) conducted by financial analysts of Euromoney in more than  100 countries for 29 years in a row. The Excellence Award includes 20  nominations for the banking sector and capital market.