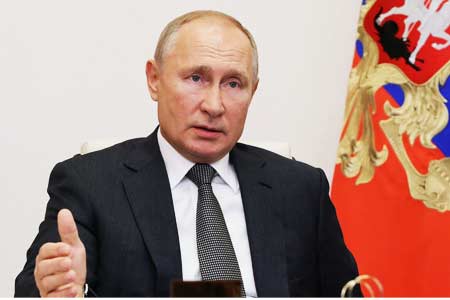 ArmInfo. With the decisive contribution of Russia, the conflict in Nagorno-Karabakh was stopped. This was stated by Russian President Vladimir Putin during a video  message to the participants and guests of the IX Moscow Conference on  International Security.  According to the Russian leader, an  important aspect of ensuring global security is the settlement of  regional conflicts, and Russia is actively promoting this.

"With the decisive contribution of Russia, the conflict in  Nagorno-Karabakh was stopped. Russian peacekeepers reliably guarantee  peace and security in the region, do a lot to improve the  humanitarian situation, demining territories and restoring social  infrastructure," Putin said.  He also recalled that thanks to Russian  military assistance, it was possible to liberate most of the  territory of Syria from international terrorists, prevent the  collapse of the Syrian state, and political and diplomatic work  within the Astana format, together with Turkey and Iran, made it  possible to start the process of Syrian settlement under the auspices  of the UN.

"Russia never forgets about the responsibility it bears for the  security and prosperity of neighboring countries, with which we are  brought together by inextricable historical, cultural, human ties. It  intends to continue to contribute to the de-escalation of regional  conflicts, strengthening peace and stability on our common  continent," the Russian leader summed up.