Kopyrkin: Russia proceeds from the fact that the format of the OSCE  Minsk Group co-chairs continues to operate 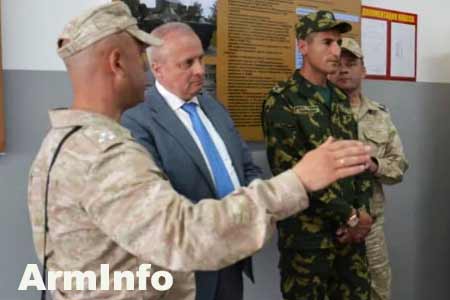 "This is a step, of course, in the right direction. It is known that  Russia initially has done and is doing everything possible to ensure  that this is carried out and that movement along this path goes  forward. The personal role of the Commander of our peacekeeping  contingent, General Rustam Muradov, in this case is very important.  The President of the country the Minister of Defense and the Minister  of Foreign Affairs are engaged in this, "the ambassador said, noting  that it is not always easy and requires serious efforts.

At the same time, Kopyrkin believes that the last exchange (exchange  of prisoners for maps of the minefields of Aghdam, Ed. note) would  not have been possible if it had not been for the preparatory, very  significant work of the Russian side, Russian peacekeepers.

He also found it difficult to comment in any way on the information  about the possible deployment of peacekeepers of the OSCE countries  in the region, noting that this topic was voiced, but he does not  have any information about this.

At the same time, referring to the mediation mission of the OSCE  Minsk Group, Kopyrkin noted that Russia proceeds from the fact that  the format of the co-chairs continues to operate. "There are issues  that are on the agenda of the OSCE Minsk Group format. I think that  much will still depend on the position of the parties," the Russian  diplomat concluded. -sh-