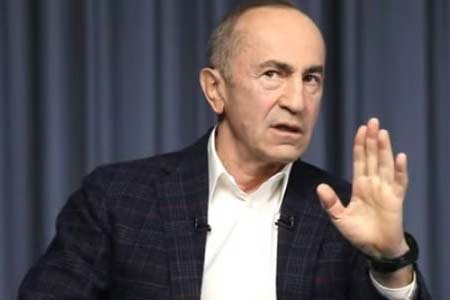 ArmInfo. Robert Kocharian's <Hayastan> (<Armenia>) bloc has not yet decided whether to take mandates to the parliament of the 8th convocation or not. Leader of  the bloc Robert Kocharian stated this on June 22 at a press  conference, emphasizing that he more considers himself as "a person  of the executive body> and he found it difficult to imagine himself  in parliament.

The candidate for prime minister from the <Hayastan> bloc admitted  that the results of the early elections came as a complete surprise  to them. "Many opinion polls, including the Gallup Association, which  cannot be suspected of sympathizing with me, indicate the contrary  (the MPG consulting company, which is the official representative of  the International Gallup Association in Armenia; not to be confused  with the American Gallup Inc.,  Ed. note), " he said.

In this context, according to the second President of the Republic of  Armenia, it is necessary to understand the scale of electoral  violations and administrative resources were carried out and applied  in order to apply to the Constitutional Court to challenge the  election results. "The headquarters are now collecting materials and  within a few days we will summarize the volume of the complaint to  the Constitutional Court," said the head of the bloc. At the same  time, according to him, the purpose of the appeal, first of all, is  to fix violations, and not to take people out into the street. He  found it difficult to say whether the bloc will require a recount of  votes, noting that at this stage, consultations with lawyers are  underway in this direction.

Robert Kocharian is convinced that the mandate received by the  authorities is not a mandate of confidence in the current  authorities. "All the meetings that we held with the citizens of the  country were more energetic than those held by the authorities," the  second president said.  The head of the bloc believes that the past  elections have qualitatively changed the political landscape of  parliamentary and extra-parliamentary forces. "Our entry into  parliament has become a kind of tsunami in the political life of the  country. We will maintain this dynamic," he said.  At the moment, the  <Hayastan> bloc has not finally made a decision to take mandates to  parliament or not.

"At the same time, today we have received very serious, new  opportunities to continue the struggle. What do we intend to do?  Continue the struggle - the parliamentary struggle, which can only  strengthen, not replace the street struggle, and in this we have  serious experience, and this combination will only strengthen our  capabilities, "Kocharian said.  In particular, as the former  president pointed out, being in parliament, the bloc will have  additional leverage in order to identify the numerous gaps and  omissions of the Pashinyan government in recent years, including  through corruption in the same area of public procurement.

"The parliamentary faction has various levers. We will use them  systemically to fight the current government. We have numerous data  that before the elections, large sums of bonuses were distributed in  the security structures. For example, the officers of the National  Security Service received quite large sums before the elections.  We  will present the documents, "Kocharian said.

The second President of Armenia also touched upon the prospects for  the future struggle of the <Hayastan> bloc. The rally of the ruling  "Civil Contract" party, according to Kocharian, created the  impression that the country's authorities will continue their rule  "in the same spirit in which they ruled for the last three years."  "In this case, undoubtedly, very soon Armenia will face the next  extraordinary parliamentary elections," he said.