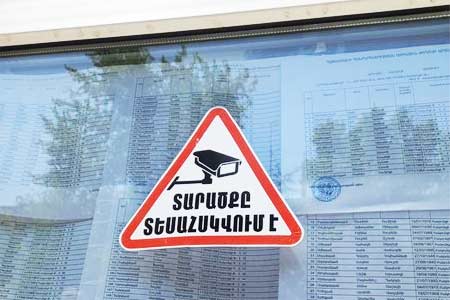 ArmInfo. In Armenia, at exactly 8:00pm local time, 2008 polling stations were closed for voting in early parliamentary elections. The vote counting process has started.   As of 5:00pm, 989,972 voters or 38.17% of the total eligible citizens  voted in the early elections to the National Assembly of Armenia, CEC  Secretary Armen Smbatyan said. According to the CEC, the number of  Armenian citizens eligible to vote is 2,593,572. 40.15% or 344868  voters voted in four constituencies in Yerevan.

Extraordinary elections to the National Assembly of the 8th  convocation were held in Armenia today.  Starting from 08.00am local  time, 2008 polling stations were opened throughout the republic in 38  territorial districts. 479 are located in Yerevan, another 1529 - in  the regions. According to the Armenian police, 2 million 578 thousand  678 people are registered in the voter register. 2.578 million  citizens have the right to participate in elections - more than 855  thousand in Yerevan.

As of 4:00pm, the RA Police received 57 signals about violations  recorded during the early parliamentary elections. According to the  press service of the Police, the reported violations related to  voting more than once (14 cases), obstruction of the exercise of the  right to vote (2 cases), violation of the secrecy of voting (1 case),  deliberate damage to property (1 case), bodily harm (1 case) and  other violations (1 case). At the same time, the RA Police revealed  cases of giving electoral bribes in the Ararat region. In particular,  in the Vedi community, a man and his wife were offered to vote for  one of the announced blocs in exchange for 30 thousand drams, in the  village of Noramarg, electoral bribes were distributed to residents  in the amount of 15-20 thousand drams. On the fact of the revealed  violations, criminal cases were initiated. An investigation is  underway.

The Office of the Human Rights Defender reports that as of 6:00pm,  they received 145 messages and applications regarding the electoral  process, studied 941 publications in social networks and the media.  The signals received by the hotline mainly concerned the  accessibility of the polling station, the impossibility of  self-representation of persons with disabilities, the issue of  inclusion in additional voter lists, violations of the voting  procedure, etc. Among the most frequently recorded publications in  social networks and the media are violations of the procedure for  submitting ballots, cases of directed voting by citizens, including  military personnel, violation of the established form of ballots,  etc. Special attention was paid to the issues of ensuring the smooth  work of observers and journalists.