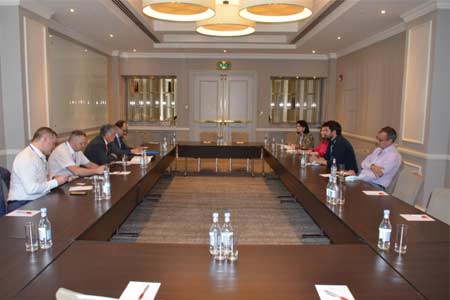 ArmInfo.As part of the monitoring of snap elections to the Armenian parliament, observers from the CIS Inter-Parliamentary Assembly, headed by the group  coordinator, Coordinator of the monitoring group from the CIS  Inter-parliamentary Assembly in early elections to the parliament of  the Republic of Armenia, Chairperson of the Standing Commission on  Industry, Fuel-Energy Complex, Transport and Communication of the  House of Representatives of the National Assembly of the Republic of  Belarus Igor Komarovsky  and Secretary General of the IPA CIS Council  Dmitry Kobitsky held a meeting with head of the Observation Mission  of the OSCE Office for Democratic Institutions and Human Rights   (OSCE / ODIHR) Eoghan Murphy. This was reported by the press service  of the IPA CIS.

Igor Komarovsky shared with his European colleagues his impressions  of long-term and short-term monitoring in the Republic of Armenia. In  particular, he spoke about the meetings held yesterday with  representatives of parties claiming a seat in parliament, the  leadership of the parliament and the Central Election Commission of  the republic, and also explained how monitoring is organized at  polling stations on election day.

Eoghan Murphy informed the CIS representatives about the composition  and work of the mission of the OSCE Office for Democratic  Institutions and Human Rights. The long-term observation mission of  the ODIHR includes 35 international experts from nine OSCE  participating States. In addition, the ODIHR recruited an additional  250 experts from OSCE participating States to observe elections on  Election Day.

Immediately on June 20, the ODIHR mission is observing together with  a delegation from the OSCE Parliamentary Assembly.

The source also said that the meetings of the IPA CIS observer group  with the leadership of the monitoring missions of other international  organizations within the framework of election observation are  traditionally held during the observation period. They allow the  exchange of views on the progress of monitoring and its intermediate  results, as well as compare the applied methodology.