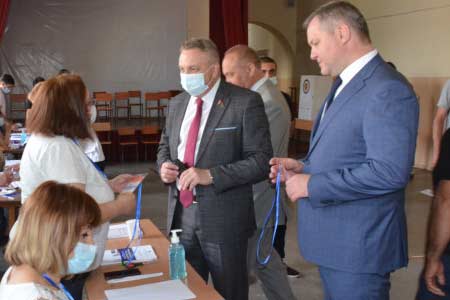 ArmInfo.  Igor Komarovsky,  Coordinator of the monitoring group from the CIS Inter-parliamentary Assembly in early elections to the parliament of the Republic of  Armenia, Chairperson of the Standing Commission on Industry,  Fuel-Energy Complex, Transport and Communication of the House of  Representatives of the National Assembly of the Republic of Belarus  and Secretary General of the IPA CIS Council Dmitry Kobitsky  conducted observations on the polling stations: No. 4/12, 13 (4/12,  13) in Yerevan since the morning.

According to the press service of the IPA CIS, international  observers talked with members of election commissions, national  observers and voting citizens. The members of the monitoring group  pay attention to the availability and completeness of information  materials, ensuring the secrecy of voting and free expression of the  will of voters.

During the day, the monitoring participants worked on individual  routes at sites in various regions of the republic.