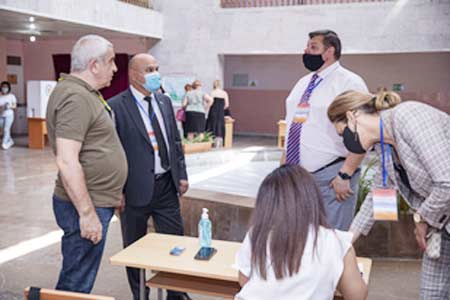 ArmInfo.There were no complaints from the CSTO PA to international observers either from local observers or from voters, and the decent organization of the  work of polling stations is observed. Sergey Kolbin, a member of the  CSTO PA Standing Commission on Defense and Security, a member of the  Federation Council of the Federal Assembly of the Russian Federation,  announced this.

He noted "some nuances that will certainly not affect the course of  the elections, but were noticed": only two polling stations were  found posted voter lists. According to Sergey Kolbin, safety and  personal hygiene products for COVID-19 - masks, sanitizers, and other  means - are available at all polling stations, and all polling  stations are provided with them in sufficient quantity, and all  security measures are carefully observed.

According to Sergey Kolbin, the voter turnout was not very high as of  11:00 am Yerevan time: by that time, about 10% of registered voters  passed through some polling stations visited by observers.

"Observers from parties and blocs are present at polling stations,  however, they are not always well-versed in who of them represents  which party. It can be assumed, the Russian senator believes that  some work with local observers was organized, but detailed briefings  with people were not carried out, "he said.

At the polling stations, Sergey Kolbin continued, there are many  young people with badges as observers, but they do not always  remember and know about whose interests they represent, what they  should monitor, and what they cannot interfere with.

"And one more thing: not all chairmen of precinct election  commissions remember how many voters passed through their precinct,  and not everyone remembers how many voters are registered behind  their precinct. As for the voting process itself, it is generally  clear and orderly," summed up Kolbin.

Kanybek Imanaliev  stressed that at the polling stations, the opening  of which was attended by observers of the CSTO PA, in particular, at  school No. 5, they were the only observers.

He also noted that observers of the CSTO PA will observe the voting  in early elections to the National Assembly of the Republic of  Armenia not only at polling stations in Yerevan, but also in other  regions of the Republic of Armenia.

Let us remind you that early elections to the National Assembly of  the Republic of Armenia are being held in Armenia on June 20. Polling  stations opened on time - at 08:00 am Yerevan time.

25 political forces are participating in early elections: 21 parties  and 4 blocs. At the polling station, voters receive ballots  corresponding to the number of participating political forces, choose  one of them, put it in an envelope and throw it into the ballot box.  Observers from the CSTO Parliamentary Assembly are present at polling  stations from the moment of opening until the end of the vote count.