Zalkaliani: In terms of regional cooperation, we are ready to work in  the format of Georgia-Azerbaijan- Armenia 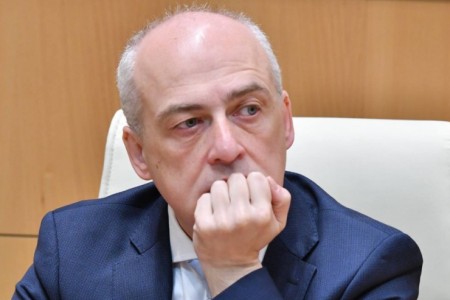 ArmInfo. Tbilisi is ready to work in the format of the Georgia- Azerbaijan-Armenia trio in order to implement geopolitically important infrastructure projects.   Deputy Prime Minister and Minister of Foreign Affairs of Georgia  David Zalkaliani stated, speaking at the Diplomatic Forum in Antalya  (Turkey).

On Saturday, Zalkaliani took part in the panel discussion "South  Caucasus: New Opportunities for Regional Peace and Cooperation".  Together with the Georgian minister, Azerbaijani Foreign Minister  Jeyhun Bayramov presented his vision of the situation in the region.

As the most successful examples of regional cooperation, Zalkaliani  pointed a number of projects being implemented by Azerbaijan, Georgia  and Turkey: the Southern Gas Transport Corridor, the Baku-Tbilisi-  Kars railway, and so on.

"Today we have a lot of opportunities. The fact that oil and gas  pipelines run through Georgian territory is an indicator of pragmatic  cooperation. Stability is important for the development of the  region," the minister said.

He stated that Azerbaijan and Turkey are Georgia's strategic  partners, at the same time attaching importance to historical and  friendly relations with Armenia.

"This is a practical demonstration of our practical cooperation. That  is why we want to convey this message to all our neighbors and,  especially, to our Armenian colleagues. In terms of regional  cooperation we are ready to work in the format of  Georgia-Azerbaijan-Armenia trio," Zalkaliani said.

He once again stressed that strengthening regional cooperation is an  unconditional priority for Georgia.  Zalkaliani also noted that it is  important to implement specific projects that will contribute to the  expansion of economic cooperation, transport links in terms of using  the potential of the Caspian and Black Seas. At the same time, the  Deputy Prime Minister of Georgia explained that the designated format  also implies the involvement of the United States, the European  Union, Turkey or other "major players" who are ready to help in the  development of the above projects.

"It is impossible to create a stable environment in the region  without deepening ties and implementing important projects. And  without stability it will be impossible to talk about development and  prosperity. So, on our part, we realized that we should work  actively, even despite our limited resources. A good example of this  is a humanitarian agreement reached between Armenia and Azerbaijan  with the assistance of the Prime Minister of Georgia and our American  partners, which provided for the release of prisoners of war in  exchange for maps of minefields, which also shows that Georgia can do  a lot. I think this is a good start to this process ",  said the  minister, Novosti-Georgia reports.

The diplomatic forum in Antalya is being held on June 18-20 under the  patronage of Turkish President Recep Tayyip Erdogan.

Turkey is organizing this conference for the first time. It is  intended to become an annual international platform for exchanging  views on topical international issues, discussing effective steps of  modern diplomacy to respond to global challenges.

This year, the forum is attended by the heads of state and government  of ten countries, foreign ministers of more than 40 states, as well  as representatives of international structures, high-ranking  officials, businessmen, public figures and scientists from different  countries.