Babajanyan stated: the information that a member of the  Shirinyan-Babajanyan bloc shot at his car is a fake 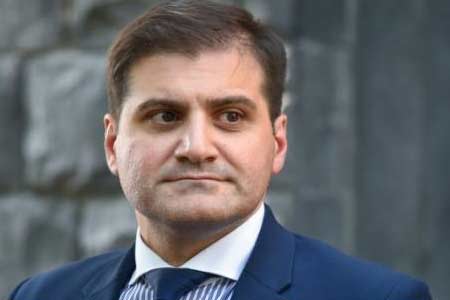 ArmInfo. Arman Babajanyan, RA NA member, candidate for prime minister from the Alliance of Democrats Shirinyan-Babajanyan, whose car was fired upon this  morning, called a press conference at which he presented the details  of the incident.

According to him, a criminal case has been opened on the fact. "I  parked the car at 2.00am at night, and in the morning at about  10.30am  I found that it had been fired upon. According to the  testimony of neighbors, an unknown assailant carried out an attack  around 9.00-9.30am The cameras show that the attacker is wearing a  white jacket with a hood. I immediately contacted the head of the RA  Police, law enforcement officers arrived at the scene and carried out  necessary investigative measures, "Babajanyan said, assuring that  this incident would not affect their determination to go to all the  way in these elections. In this vein, he urged to vote against the  criminal , bloody elements acting by these methods. At the same time,  Babajanyan did not voiced names, assuring that the bloc knows  perfectly well who did this, who is striving for upheavals in the  country, but they will not be able to realize it. "Do not intimidate  us with any shots. I call on our people to answer these shots with  their own votes. To fire shots against those who, during their rule,  resorted to tyranny, sowed an environment of fear," Babajanyan said.

The bloc's representatives also stated that the previously  disseminated information that the criminal was identified and is a  member of the Shirinyan-Babajanyan Alliance of Democrats is  disinformation.  According to them, a fake email address was created  from which the message was distributed.

To note, such a message was also received by ArmInfo. In particular,  it said that a representative of one of the mafia structures opened  fire on the car and that the attacker had been identified. He is  allegedly a member of the Shirinyan-Babajanyan bloc. Shooting at an  empty parked car, this so-called ally tried to draw additional  attention to the bloc. "I condemn this behavior and assure that those  who try to do us a disservice will be severely punished," a fake  statement of Babajanyan said.  Let us remind you that the incident took place at around 9:30am local  time. The RA police are investigating the fact.