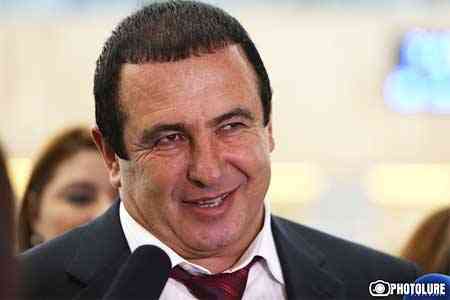 ArmInfo.On June 20, candidate for Prime Minister of Armenia, leader of the Prosperous Armenia Party Gagik Tsarukyan voted for "a powerful, prosperous Armenia". He told  reporters about this after he voted at the polling station 29/29 in  Arinj.

When asked whether he is going to appeal the results of the  elections, if he is not satisfied with them, Tsarukyan said: "If  everything goes well, why raise a fuss? If we see that the people did  not want us and did not vote, what can I do?"

The PA leader once again ruled out the possibility of forming a  coalition with Nikol Pashinyan's "Civil Contract" party. When asked  if Khachatur Sukiasyan (a prominent businessman, Gagik Tsarukyan's  co- father-in-law Khachatur Sukiasyan, entered the top five of the  proportional list of Pashinyan's "Civil Contract" party - ed. note)  can influence his decision so that he would join Nikol Pashinyan, the  PA leader said : "Who can influence Tsarukyan? This is senseless,  empty talk."

Gagik Tsarukyan answered the question whether it is possible to  comment on "his passivity during the campaign as a willingness to  close the political page of his life." "Everyone who thinks in this  way is seriously mistaken. Tsarukyan has a program, opportunities,  and a desire to build a strong Armenia," he said.

Extraordinary elections to the National Assembly of the 8th  convocation have started in Armenia. From 08.00am local time, 2008  polling stations were opened throughout the republic in 38  territorial districts. 25 political forces are taking part in the  elections: 4 blocs and 21 parties. The elections will be held on a  100% proportional system. The entry barrier for parties is set at 5%,  for alliances - 7%. There is no turnout threshold.