"When the Sun Rises": A new exposition opened at the ARARAT Museum 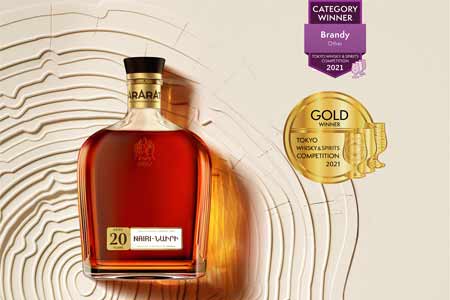 ArmInfo. A new temporary exposition under the name "When the Sun Rises" has opened in the museum of the Yerevan Brandy Company (YBC) ARARAT.  "When the Sun  Rises" is a small collection of samples of the legendary Armenian  brandy that have won many medals at various international venues.

At the exhibition, where exceptional exhibits of the huge heritage of  the Yerevan Brandy Company are presented, one can see the "Selected"  brandy, which was awarded a gold medal back in 1907. It was this  medal that laid the foundation for the conquest of hundreds of other  medals in different countries of the world. The author of this brandy  was Mkrtich Musinyants, who got education at a wine and vodka college  in the French city of Montpellier and upon returning home, in  gratitude he named his first varietal brandy " Fine Champagne  Selected"". Brandy has won the hearts of many meticulous French  cognac lovers, paving the way for new conquests.

The next eminent exhibit is the Dvin brandy, created by Markar  Sedrakyan, a scientist, a master technologist, in fact the founder of  Armenian brandy, who created his famous blends in the middle of the  20th century. Brandy was created in 1945 and already at the famous  Potsdam conference in Yalta "Dvin" earned its high praise. It was the  medal that was awarded to "Dvin" that marked the beginning of the  golden age of the brandy factory in the 20th century. It was then, at  the beginning of the 20th century, one of the greatest Russian poets  Boris Pasternak said: "Markar Sedrakyan convinced the whole world  that brandy speaks Armenian."

Among the exhibits of the exhibition is the "Armenia" brandy created  in 1940, whose bouquet was restored thanks to the painstaking work of  the factory's specialists after 75 years. Thanks to their diligence,  in 2015 the brandy was revived.

Among the presented items is the well-known Akhtamar brandy produced  in 1970, when ARARAT acted from new positions, where the  thousand-year-old art and professionalism were competently  harmonized, accompanied by ambitious innovations. Visitors will also  see the 20-year-old ARARAT "Nairi", which won the gold medal, as well  as the title "Category Winner" in the Tokyo Wine and Spirits  Competition.  The legendary Armenian ARARAT brandies from the moment  of their creation have personified Armenia, transmitted the warmth of  the Armenian land and the sun, skill and boundless love in different  parts of the world. Periodically changing its appearance, ARARAT  brandies have won the hearts of the most scrupulous specialists for  decades and won the highest marks.

"When the Sun Rises" is a story about golden victories of the past,  the brilliance of which illuminates the path to future victories.