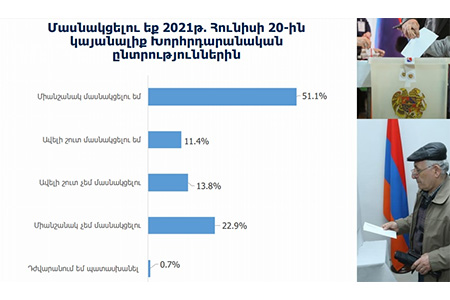 ArmInfo. Second RA President Robert Kocharian's "Armenia" bloc has outstripped Nikol Pashinyan's "Civil Contract" party for the first time in the final election poll  "Bets are made!" by the MPG consulting company, topping the list of  the RA political forces participating in the June 20 elections. 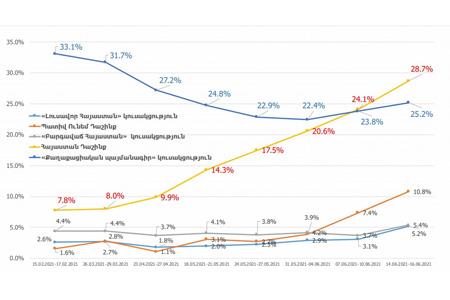 The study also presents the dynamics of changes in the positions of  citizens in relation to certain political forces in the period from  February of this year until June of this year. In particular,  according to the presented schedule, in February 2021. 33.1% of the  respondents were ready to vote for the party, but by  June of this year, this figure had dropped to 25.2%. The opposite  dynamics is observed with regard to Kocharyan's "Armenia". If in  February of this year, 7.8% of respondents were ready to support the  bloc of the second president of the Republic of Armenia, than in June  their number increased to 28.7%.

The "I Have Honor" bloc of the third president of the Republic of  Armenia also showed upward dynamics - from 1.6% in February of this  year, reached 10.8% in June this year.  At the same time, the PAP and  "Bright Armenia" did not undergo any special changes over the  specified period (from 4.4% to 5.4% and from 2.6% to 5.2%,  respectively).

To note, the survey was conducted through telephone calls to  residents of Armenia in the period from 14 to 16 June this year, the  sample size was 1105, the sampling error is +/- 3%.

To remind, in 2011 MPG became the official representative of the International Gallup Association in Armenia (not to be confused with the American Gallup Inc. - Ed.). MPG, working in the market of sociological and marketing research since 2003, has implemented more than 800 projects of various sizes.