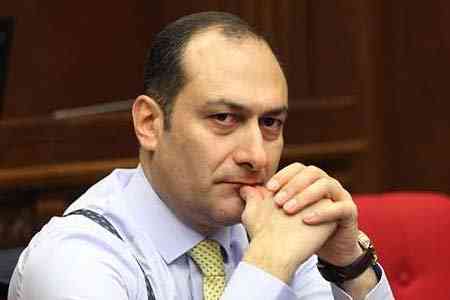 ArmInfo.To date, the military-political balance between Armenia and Azerbaijan has been  seriously disturbed in favor of the latter. The Turkish-Azerbaijani  alliance has turned into a very serious security threat for Armenia.  And thus, based on the results of last year's war, it seems possible  to state that the Armenian-Russian alliance  was defeated by  Turkish-Azerbaijani alliance. Artak Zeynalyan, former Minister of  Justice, who ranks second on the electoral list of the party, expressed a similar opinion to ArmInfo.

"Unfortunately, the organization of the Armenian army and Russian  weapons, were defeated by Turkish weapons and NATO standards. In this  light, the only possible conclusion is that the concept of our  country's foreign policy needs diversification and this, in my  opinion, is unambiguous. Therefore, Armenia needs more multi-vector  policy, which would allow us to feel more secure in our region. This  is the position of our party, and in case of victory in the  elections, we intend to promote it, "he said.

According to Zeynalian, security occupies a key place in the  electoral program of "Republic" party. And in ensuring it, the party  attaches great importance to the foreign policy component. In  particular, it is necessary and extremely important to restore the  military-political balance disturbed last year. For which, in his  opinion, it is necessary not only to reform, modernize and strengthen  the Armed Forces, but also to search for and enter new partners and  allies in the international arena.

Zeynalyan, in this light, recalled the actual inaction during the  autumn war of both Armenia's bilateral treaties with Russia and  mutual obligations within the framework of Armenia's membership in  the CSTO.  Meanwhile, in the fall of 2020, the territorial integrity  of Armenia was violated at least three times: in Gegharkunik and  Syunik. Moreover, the Azerbaijani army destroyed the S-300 air  defense complex located in Vardenis, the latter, according to him,  was part of the United Air Defense System.

"Moscow has remained silent about all these cases. Moreover, Russia  even has not taken effective steps in response to the destruction of  their military helicopter by Azerbaijan in the Ararat region of  Armenia. I'm not even talking about the fact that, Moscow, having a  powerful intelligence network, could not have been unaware of the  impending Azerbaijani-Turkish attack on Artsakh and Armenia. But in  response to all this from one of the most powerful states in the  world, absolutely no action followed, which should and does raise  many questions>, believes Zeynalyan.