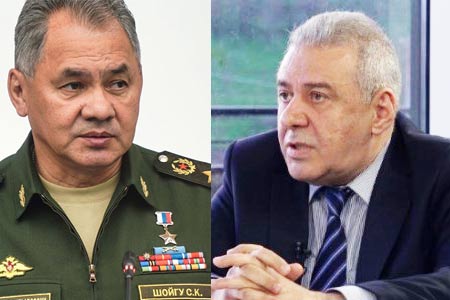 ArmInfo. Acting Minister of Defense of the Republic of Armenia Vagharshak Harutyunyan during a telephone conversation with Minister of Defense of the Russian  Federation Sergey Shoigu noted that the Armenian side respects the  calls of the partner states and bodies to resolve the issue  peacefully, at the same time emphasizing that the position of the  Armenian side is unchanged: the Azerbaijani Armed Forces must leave  the sovereign territories of the Republic of Armenia without any  preconditions.

As reported by the press service of the RA Ministry of Defense,  Vagharshak Harutyunyan and Sergey Shoigu also discussed issues  related to the deployment of Russian border guards on the Armenian-  Azerbaijani sections of the border in the Syunik and Gegharkunik  regions of the Republic of Armenia together with the Armed Forces of  Armenia.  The parties touched upon the mission of the peacekeeping  contingent of the Russian Federation in the Republic of Artsakh, the  Armenian-Russian cooperation in the defense sector, as well as a  number of issues related to regional problems.

To recall, since May 12 The Azerbaijani Armed Forces invaded the  sovereign territory of Armenia in two directions (Syunik and  Gegharkunik) and refuse to leave the territory. The Armenian side is  trying to resolve the situation peacefully, meanwhile the Azerbaijani  Armed Forces continue to terrorize civilians in the border area by  stealing their livestock. The last incident took place the previous  morning. The Azerbaijani servicemen stole and slaughtered the cow of  a resident of the village Zhorzha. It can be assumed that the  President of Azerbaijan poorly supports his military and they are  starving, since they spread to the Armenian cows.