Levon Shirinyan: "Hayastan" bloc headed by Robert Kocharian will not  be a force component in the political life of Armenia 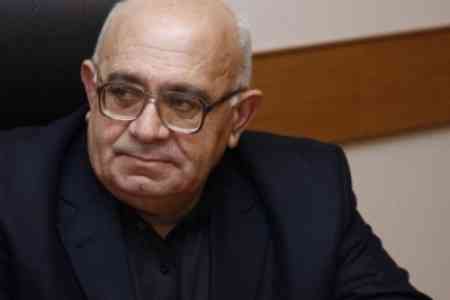 ArmInfo. The second on the electoral list of "Bloc of Democrats Shirinyan-Babajanyan", the head of the Christian Democratic Party Levon Shirinyan is convinced that the "Hayastan" bloc headed by Robert Kocharian will not be a force  component in the political life of Armenia. "Crimea is yours, there  are no problems, but Armenia is ours, we will not surrender it," he  said on June 16 at a meeting with residents of Spitak in the Lori  region of the republic.

Nevertheless, according to him, this point of view does not mean that  the members of the bloc are Russophobes. In fact, as Shirinyan  pointed out, they are Armenian-centered. "There will be no mafia in  Armenia, there will be no robbery - there will be production and  economy," he said.

At the same time, Shirinyan does not deny that many Armenian voters  are worried about the question of what their relations with Russia  will be. These relations are important not only in geostrategic and  historical terms, but due to the fact that a large Armenian diaspora  lives in the Russian Federation, he noted. "We will have to build a  country that will communicate with Russia on an equal footing. We  have no problems with Russia, there is a requirement - to interact  with us as an equal. The request and proposal of friendly Russia is  not to influence the elections through its agent network, "said Levon  Shirinyan.

The member of the bloc warned Russian Armenians not to try to  influence the elections.

The electoral list of the "Shirinyan-Babajanyan Bloc of Democrats"  was headed by the representative of the governing body of the "For  the sake of the Republic" party, deputy of the National Assembly  Arman Babajanyan. The second number of the bloc is the head of the  Christian Democratic Party Levon Shirinyan, the third is the lawyer  Seda Safaryan, sister of the head of the Public Chamber Stepan  Safaryan.