President of Switzerland: Ceasefire in Nagorno-Karabakh has been  achieved thanks to Russia 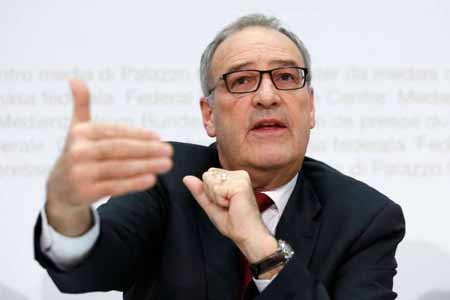 ArmInfo.President of Switzerland Guy Parmelin noted about the importance of maintaining contacts with Russia at the proper level. He spoke on this topic on  Tuesday, June 15, at a press conference following a meeting with  American leader Joe Biden.

"We have several issues for discussion. In addition, we have  excellent contacts with the Russian Federation.

It is very important to maintain these contacts at the proper level.  And if we have the opportunity to hold a summit between Russia and  the United States in Geneva tomorrow, it is because this factor of  neutrality, respectful communication and sincerity is highly valued,"  Parmelin said, answering a question from an Izvestia correspondent.

In turn, Ignazio Cassis, Vice President head of the Federal  Department of Foreign Affairs of Switzerland, recalled that he had  already mentioned security issues in Europe with reference to Russia.

"We have already talked about such issues as Nagorno-Karabakh and the  Ukrainian conflict - these are all elements in which we are very  involved, such as, for example, the Minsk process under the auspices  of the OSCE, in which a lot of personnel from Switzerland work,"  Cassis added.

Also during a press conference, Parmelin said that the ceasefire in  Nagorno-Karabakh has been achieved thanks to Russia.

Cassis, for his part, said that he and the president intend to  discuss the situation in Ukraine and Nagorno- Karabakh during a  meeting with Russian leader Vladimir Putin.

"At the talks with Putin to be held on June 16, Parmelin intends to  consider the overall results of our contacts at different levels,"  said Cassis.

Switzerland on June 16 hosts a meeting between Putin and Biden. It  will be the first summit of leaders of the two countries since Biden  took office as U.S. President. For Putin, the visit to Geneva will be  the first foreign trip since January 2020. The summit will take place  at the 18th century estate of La Grange on the shores of Lake Geneva.