Presidents of Turkey and Azerbaijan signed the Shushi Declaration on  Alliance 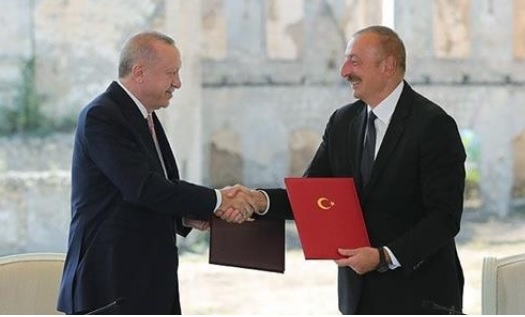 ArmInfo. The leaders of Turkey and Azerbaijan, Recep Tayyip Erdogan and Ilham Aliyev, held talks on Tuesday in the occupied Karbakh city of Shushi. Following the negotiations, the signing ceremony of the so-called ''Shusha Declaration of Alliance''  took place.

Aliyev noted that the Shusha declaration of alliance between  Azerbaijan and Turkey contains a reference to the historic Kars  agreement signed 100 years ago.

According to Aliyev, the declaration touches upon many important  issues, such as joint cooperation in the international plane,  political relations, trade and economic ties, culture, education,  sports, youth policy.  "Almost all areas are covered. The importance  of energy security, the Southern Gas Corridor for Turkey, Azerbaijan  and Europe is indicated. Each issue reflected in the declaration is  very important. Among them I would like to highlight two issues.  First, this declaration reflects the issues of cooperation in the  field of defense and the defense industry, as well as mutual military  assistance. This is a historic achievement. This proves once again  that we will continue to be together. We will continue to ensure  mutual security, "the leader of Azerbaijan said.

Aliyev called the opening of new transport communications the second  important issue.  "The declaration reflected clear language regarding  the opening of the Zangezur corridor. This is the result of the new  geopolitical situation that emerged after the Second Karabakh War.  Today we are not only talking about the Zangezur corridor, which will  connect Turkey and Azerbaijan by rail and road, but we are also  creating this corridor through practical actions. The fact that this  issue is reflected in the joint Declaration of Alliance is of great  importance, "the head of state said.

"I have repeatedly said that today Turkey and Azerbaijan are the  closest countries on a global scale, we have opportunities to develop  our cooperation," the President of Azerbaijan added.  Meanwhile, the  signed joint declaration on alliance states that the parties will  provide each other with assistance in the event of a threat or attack  by a third state on the independence or territorial integrity of  either side.

The security councils of Turkey and Azerbaijan will regularly hold  joint meetings on national security issues.

"Azerbaijan highly appreciates the support of Turkey in the issue of  ending the 30-year-old aggression of Armenia and the liberation of  the occupied territories", says the text of the document.  The sides  studied all the prospects for further expansion and deepening of  Turkish-Azerbaijani relations, the declaration says.

The document emphasizes that Turkey and Azerbaijan are making joint  efforts to address issues of regional and global security and  stability.

"The parties emphasize the important role of Turkey's contribution to  the activities of the Turkish-Russian joint center in the liberated  territories", reads further the declaration.  The declaration noted  that the opening of the Zangezur corridor between Turkey and  Azerbaijan and the Nakhchivan-Kars railway line will contribute to  the development of relations between the two countries.  The Shusha  Declaration focuses on the fact that Armenia's unfounded claims to  Turkey and attempts to distort history damage peace and stability in  the region.

"The military-political cooperation developing between the two states  [Turkey and Azerbaijan] and meeting their interests is not directed  against third states," the text of the document emphasizes.  The  declaration also noted that the parties will expand joint efforts and  cooperation in the fight against terrorism, organized crime, drug  smuggling, illegal migration.

Moreover, Recep Tayyip Erdogan said at a joint press conference with  Ilham Aliyev that a Turkish consulate would open in Shushi as soon as  possible.

At the same time, Erdogan expressed the hope that peace in the region  can be achieved thanks to the six- sided platform, which includes  Russia, Turkey, Iran, Georgia, Azerbaijan and Armenia. In this vein,  he recalled that Turkey is ready to make every effort to form the  latter, adding that Russian President Vladimir Putin has similar  intentions. "We hope that Armenia will take this opportunity and  reciprocate the hand of goodwill and solidarity extended to it to  shape a common future," Erdogan said.  The Turkish President also  stressed that with the implementation of the Zangezur Corridor  project, a new single corridor will open, which all countries from  east to west will be able to use.  During the press conference, he  also said that together with the President of Azerbaijan, they  discussed the possibilities of investing oil companies SOCAR and TPAO  in third countries.