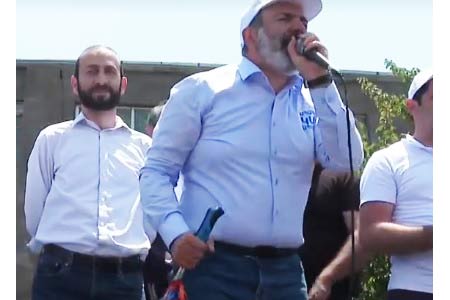 ArmInfo. Acting Prime Minister of Armenia Nikol Pashinyan promised to put an end to "velvet", replacing it with "steel". He stated this during his speech in Sisian  as part of the election campaign.

Pashinyan confirmed his words, once again showing the assembled  citizens a hammer, with which he promised to "knock out all the rusty  nails", since for the latter Syunik is not a homeland, but a customs  terminal for their offshore companies. "And with this" steel  "mandate, we will break up their accounts, their companies," he  stressed.

Acting Prime Minister also touched upon the situation on the border,  which needs to be resolved peacefully. In this context, he said that  he keeps in touch with Russian colleagues on a daily basis.   "Azerbaijani troops must leave the territory of Armenia. And this  point of view is supported by the entire international community," he  said. At the same time, Pashinyan shared the following vision: "A  Russian peacekeeping contingent should be deployed along the entire  perimeter of the border. And the delimitation of borders and their  clarification from Sotk to Khoznavar should take place under the  auspices of international observers," he said. At the same time, the  acting head of government admitted the opinion that an attempt is  made to use the situation at the border as a tool to influence the  course of the elections.

At the same time, he invited all his associates from all over Armenia  to gather for a nationwide rally to be held on June 17 at 8:00pm on  Republic Square.

In conclusion, Pashinyan called on citizens on June 20 to give an  answer to those who organized the terrorist attack on October 27,  1999, the murders on March 1, 2008, the elite oppressing the Armenian  people, those who privatized the Zangezur copper-molybdenum combine  for a pittance, who robbed bread from soldiers, etc.