Kocharian: After the elections, a thorough investigation is needed to  dispel suspicions of treason against Pashinyan 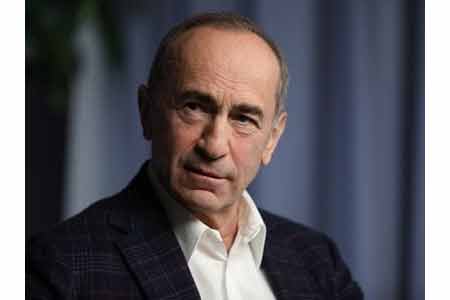 ArmInfo.The candidate for prime minister of Armenia from the Hayastan bloc (<Armenia>), second president of the Republic of Armenia Robert Kocharian believes that the Armenian side had an absolute opportunity not to lose the war in  Karabakh.

"Firstly, there was an absolute possibility of not losing it (the  war, Ed. note), it was possible to stop it. We had such  opportunities. This is just mediocre management of the war. And about  stopping the war, there was the initiative of the President of  Russia, if I am not mistaken, on October 19," Kocharian said in an  interview with RIA Novosti, Sputnik Armenia and RT.

According to him, the Armenian side, for completely incomprehensible  reasons, rejected this proposal, arguing that  head of the  government, Nikol Pashinyan, would be misunderstood and called a  traitor. "We have lost more than if we had agreed at that time, he is  called a traitor, anyway, and with much greater enthusiasm,"  Kocharian said.

The reasons for the failure in hostilities, he called "mediocre  command and control in Armenia itself, mediocre command and control  of troops." "An absolute misunderstanding of what war is, what  mobilization is, what is the formation of a mobilization resource,  what is the replenishment of the army.  Any army in the event of a  large-scale war only with its human resources, potential can  withstand a week and a half. Then the state enters with all its  might, goes mobilization of people, preparation of reserves,  replenishment. In this case, it was an absolute failure ", Kocharian  said.

According to him, completely incomprehensible decisions were made,  "and so incomprehensible that it aroused great suspicions whether  there were any other agreements here, whether there was treason,  something that already belongs to conspiracy theories."

"And such doubts still remain.  A thorough investigation is needed to  dispel them after the elections. It is completely incomprehensible  how Shushi was surrendered. Some decisions related to the defense of  Shushi are not clear, it is not clear how Hadrut was surrendered, how  Azerbaijani troops, practically not meeting any resistance, from  Hadrut ended up in pickup trucks near Shushi. A completely  incomprehensible story, answers to these questions must be given,"  the former head of state believes.