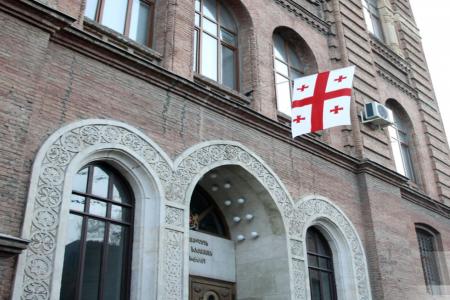 ArmInfo. The Georgian authorities have always tried to play the role of a mediator and get the function of a peacemaker in the region, Georgian Foreign  Minister, Deputy Prime Minister David Zalkaliani said at a briefing  today.

It became known last week that Azerbaijan released 15 Armenian  citizens detained during the conflict with the active mediation of  Georgian Prime Minister Irakli Garibashvili and with the inclusion of  acting Deputy Assistant Secretary of State Philip Reeker.

In addition, the Armenian side handed over important materials to  Azerbaijan with the help of the Prime Minister of Georgia. The head  of the Georgian government was personally in constant contact with  the President of Azerbaijan Ilham Aliyev and acting Prime Minister of  Armenia Nikol Pashinyan.

"Efforts have been made in the past, but there was no concrete  result, and for the first time this result came.  This is an  unprecedented case, a victory for the country, a huge victory for our  country. And the fact that this mediation and facilitation from our  side was constantly taking place from Tbilisi within the framework of  the G7 format, and world leaders were interested, they were  constantly interested in what was happening in terms of mediation,  what progress was, and they constantly received messages from  Tbilisi, and thus our agenda has become even more urgent, and our  role, significance and function have been emphasized, " Zalkaliani  said

According to him, rather intensive attempts at mediation began  already 2 - 3 months ago and in the last month they entered a  particularly active phase, when the Prime Minister of Georgia was on  a visit to Azerbaijan, Armenia and Turkey.

"We need to make great efforts to ensure that the topic of Georgia is  constantly on the agenda of the international community, and for this  we use different methods and tactical ways.

One of the important issues in these international relations is to  show our importance, to show our function to major players in the  region. This is exactly what has been done in the last 2-3 days and  what has been done by the Georgian authorities under the leadership  of the Prime Minister," Zalkaliani noted, Georgia- online reports.