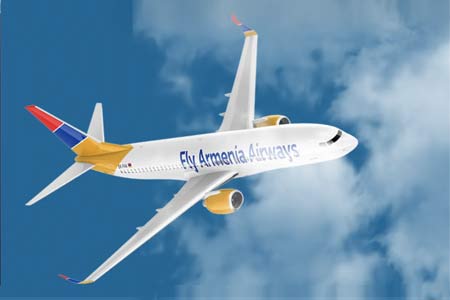 ArmInfo. The Civil Aviation Committee of Armenia informs about the completion of the official investigation into the incident related to the technical flight of  the Boeing B737-300 EK-FAA of Fly Armenia Airways.

According to the company, as a result of the investigation, problems  were identified that threaten flight safety.

Based on the identified shortcomings, as well as the fact that "Fly  Armenia Airways" LLC currently does not have a suitable aircraft for  operation, it was decided to suspend the operator  certificate of aircraft No. 070.

At the same time, the Civil Aviation Committee informs that the  investigation of this case continues in the RA National Security  Service.

To recall,  we are talking about the unauthorized landing of a Boeing  B737-300 of Fly Armenia Airways on February 20, 2021 at Tehran's  Mehrabad airport, which from April 23 this year is already at the  Zvartnots airport in Yerevan.

To recall, on February 23 it became known about the hijacking of a  Boeing B737-300 aircraft. In this regard, former adviser to the Prime  Minister Hakob Chagaryan wrote on his Facebook page that on February  21, the Civil Aviation Committee received a telegram from the General  Directorate of Civil Aviation of the United Arab Emirates about the  hijacking of a Boeing B737 aircraft with the Armenian registration  number EK-FAA. Earlier, the Civil Aviation Committee reported that  the flight was of a technical nature. At the same time, an official  investigation was appointed to clarify the circumstances.