Yerevan`s road tunnels are provided with round-the-clock lighting:  the next in line are parks and squares 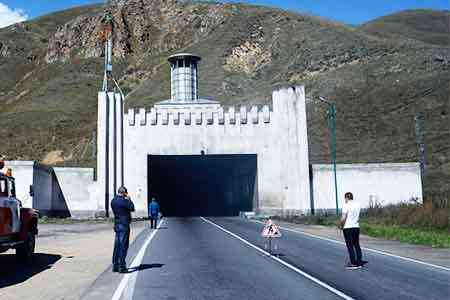 ArmInfo. The Yerevan Municipality initiated the modernization of the lighting of the  capital's road tunnels. According to the press service of the  metropolitan municipality, this program was launched last year.

Thus, as of today, about 400 LED lamps are installed in the tunnels.

The purpose of this program is, first of all, to ensure road safety,  and secondly, to save energy.

For example, before the modernization, electricity consumption in the  tunnel leading from Heratsi Street to Saralanj Street was about 25  thousand kWh, and in monetary terms about 1 million drams per month,  now these costs will accordingly be reduced to 5.5 thousand kWh. In  total, according to director of "Yerqaghluys" Galust Vardanyan, which  is engaged in the installation of LED lamps in the tunnels of  Yerevan, thanks to the modernization, it is possible to save up to  80% of electricity. And the funds saved thanks to this program will  be used for the implementation of new projects related to the  external lighting of the capital. The next, according to the source,  will be work on the modernization of the lighting of the capital's  parks and squares.

To note, the program for the modernization of street lighting in  Yerevan was launched back in 2016 with the signing of a grant  agreement with the European Bank for Reconstruction and Development  (EBRD) for 1.9 million euros and a loan agreement for 3.7 million  euros. The project assumed the gradual transition of street lighting  in Yerevan to energy efficient LED technologies. The new LED lighting  will cut energy costs by 64%. The EU and the Swedish government also  donated the projects.