If Sargsyan`s bloc enters parliament, it does not rule out the possibility of forming a coalition with Kocharian`s bloc 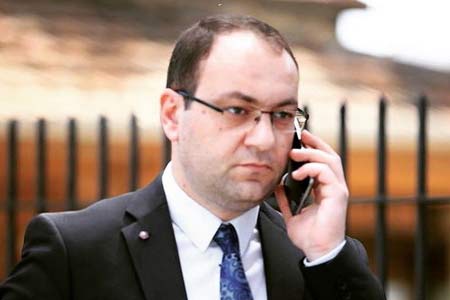 ArmInfo.Arsen Babayan, a member of the pre-election bloc "I Have the Honor", considers it possible to form a coalition with the "Hayastan" bloc of Robert Kocharian if it enters parliament. He stated this on June 14 at a press conference.

"I am sure that we will take all logical actions to eliminate this power - I consider it realistic to form a coalition with the Hayastan bloc," he said.

According to Babayan, the current government understands that the alternative to being in power is to be brought to justice for numerous crimes. In this regard, it will go to the end, the politician is convinced. At the same time, he expressed hope that the law enforcement agencies will correctly assess all kinds of developments, fulfill their duties in full, thus preventing the "power-capitulator" from once again seizing power by means of a coup.

As Arsen Babayan noted, all the statements and threats voiced by acting Prime Minister Nikol Pashinyan during the meetings with voters not only continue his policy of dividing society into "white" and "black", but also contain signs of a crime, but the General Prosecutor's Office is inactive, as it is "in his pocket." Babayan also touched upon the detention of the former mayor of Armavir, candidate from the opposition bloc "I Have Honor" Ruben Khlghatyan.  Firstly, as the representative of the bloc pointed out, the criminal case was initiated by a body that does not have the authority to do so - the Investigative Committee of the Republic of Armenia.

Meanwhile, it is under the jurisdiction of the Special Investigation Service. The lawyers filed a complaint about the lawfulness of Khlgatyan's detention. At the same time, according to him, the concepts of "selective bribery" and "Khlgatyan" are incompatible, since the latter is a respected person in his region. "The number of his supporters excludes the fact of bribery," he said. According to Babayan, the aim of the criminal case is to isolate Khlgatyan at this stage in order to deprive the bloc of voters' votes and influence voters by disseminating superficial information.

On June 11, the press service of the Prosecutor General's Office reported that two people were detained for trying to give an electoral bribe of 9 million drams (about 17.3 thousand US dollars) to collect votes in favor of the bloc participating in the early parliamentary elections. On the same day, based on the prepared materials, a criminal case was initiated in the Prosecutor's Office of the Armavir region on the grounds of Part 2, Article 34-154.2 of the Criminal Code of Armenia. The preliminary investigation of the case was entrusted to the Regional Investigation Department of the Investigative Committee of the Republic of Armenia. R. Kh. and G. P. were detained. They refused to testify. On the same day, the Central Election Commission of Armenia satisfied the petition of the