Moscow, Tbilisi, Brussels and Washington welcome the return of  Armenian prisoners of war in exchange for maps of minefields 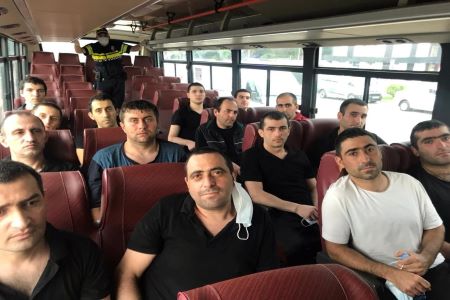 Charles Michel, President of the European Council, expressed his  support to the leaders of Armenia and Azerbaijan in connection with  the return of prisoners. "I applaud Azerbaijan and Armenia's parallel  humanitarian gestures - releases of detainees and the transfer of a  map of minefields. This is the first step towards renewing  confidence. The EU has supported this process and will continue to  offer assistance to enhance progress, "he wrote on his official  Twitter page. The Georgian government also welcomed the decision of  Azerbaijan and Armenia to return prisoners of war in exchange for  maps of minefields.

<With the active mediation of the Prime Minister of Georgia Irakli  Garibashvili and acting US Assistant Secretary of State for European  and Eurasian Affairs Philip Reeker, the Azerbaijani side released 15  Armenian citizens detained during the conflict. Georgia is ready in  the future, if necessary, to help partners and actively participate  in solving humanitarian issues, first of all, "the Georgian  government said in a statement.  "The Prime Minister of Georgia  welcomes this decision of the neighboring countries, which should lay  the foundation for reducing tensions in the region and creating an  atmosphere of cooperation in the long term.  Georgia attaches great  importance to peace, stability and cooperation in the region. We hope  that the step taken by Georgia will give an important impetus to  reduce tensions between neighbors, "the Georgian government said in a  statement.  The US Department of State also made a statement, noting  in particular: "The United States welcomes the release by Azerbaijan  of 15 detained Armenians and their return home to their families in  Armenia. We also welcome Armenia's decision to provide Azerbaijan  with important information that will facilitate humanitarian demining  and avoid future casualties. We are grateful to Prime Minister Irakli  Garibashvili and the Georgian government for the important role that  Georgia has played in facilitating these steps, which bring the  peoples of the region closer to the peaceful and prosperous future  they deserve.

The United States is pleased to support these steps and hopes that  they will lay the foundation for additional cooperation. We continue  to call for the return of all detainees and stand ready to assist the  countries of the region in their efforts to continue cooperation to  resolve outstanding issues between them. We also continue to call on  Armenia and Azerbaijan to resume substantive negotiations under the  auspices of the OSCE Minsk Group co-chairs for a comprehensive  political settlement of the conflict. " As ArmInfo previously  reported, the Azerbaijani Foreign Ministry reported that on June 12,  the Azerbaijani side handed over 15 Armenian prisoners to Armenia in  exchange for providing Armenia with maps of minefields, where the  location of 97,000 anti-tank and anti-personnel mines in the Aghdam  region was recorded. The exchange was held at the  Azerbaijani-Georgian border with the participation of representatives  of Georgia.

"We appreciate the support of the Georgian government headed by the  Prime Minister of Georgia Irakli Garibashvili in carrying out this  humanitarian action. At the same time, we emphasize the role of the  acting US Secretary of State Antony Blinken at the head, Philip  Reeker, Assistant Secretary of State for European and Eurasian  Affairs; Charles Michel, President of the EU Council; and the Swedish  OSCE Chairmanship.  Obtaining mine maps will save the lives and  health of tens of thousands of our citizens, including demining  specialists, and accelerate reconstruction projects initiated by the  President of the Republic of Azerbaijan, Mr. Ilham Aliyev, in Aghdam  and the return of internally displaced persons, "the Azerbaijani  Foreign Ministry said in a statement.

Immediately after this statement by the Ministry of Foreign Affairs  of the Republic of Azerbaijan, the information was confirmed by the  acting Prime Minister Nikol Pashinyan and the names of the returned  Armenians were published.  It is worth noting that more than two  hundred Armenian prisoners of war and civilians continue to be  illegally held in Azerbaijani captivity. According to point 8 of the  trilateral statement of the leaders of Armenia, Azerbaijan and Russia  of November 9, 2020, all prisoners of war were to be released  immediately and without preconditions. Meanwhile, against the  background of the inaction of the international community, Azerbaijan  continues to speculate on these issues and receive dividends.